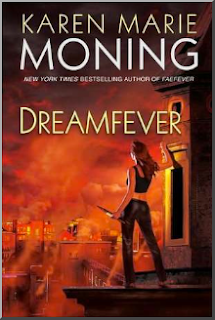 They may have stolen my past, but I’ll never let them take my future.

When the walls between Man and Fae come crashing down, freeing the insatiable, immortal Unseelie from their icy prison, MacKayla Lane is caught in a deadly trap. Captured by the Fae Lord Master, she is left with no memory of who or what she is: the only sidhe-seer alive who can track the Sinsar Dubh, a book of arcane black magic that holds the key to controlling both worlds.

Clawing her way back from oblivion is only the first step Mac must take down a perilous path, from the battle-filled streets of Dublin to the treacherous politics of an ancient, secret sect, through the tangled lies of men who claim to be her allies into the illusory world of the Fae themselves, where nothing is as it seems—and Mac is forced to face a soul-shattering truth.

Who do you trust when you can’t even trust yourself?

WHAAAAAAAAAAAAAT? If I didn’t have book #5 I would be FURIOUS. She can’t leave us hanging like THAT!! Mean, mean woman!

Oh my god. This book ends on a Huge cliffhanger so beware! In this 4th instalment, all hell has broken loose and Mac has been through worse than hell. Or maybe not? I’m not sure. It didn’t seem so bad, right? o_O  The novel starts strong and keeps going with tons of energy. But, not surprisingly, the questions are still piling up. We got a teasing glance in Barrons’ past, but other than that, book 5 has to be packed full of answers – or I may harm somebody.

The characters have changed in big ways, in this book especially, and I love how Moning has voiced them. It’s not enough to tell us that Mac is different, she took her character and showed us. It was amazing to be in her head while she was being “cured” and see the raw animalism that makes a person pra-ya. It makes us understand the fae world that she has built. World building is definitely not overlooked in this series: One of the best I’ve ever read.

Dani was also much more present in this one and actually had a few chapters in her POV. Dani is 13 years old, and you could tell! Moning wrote her nonchalance and teenage behaviour wonderfully. It served well to differentiate the characters and mindsets. I’ve read lots of books where there are multiple POVs but they all sort of blend in together. So props to fantastic writing.

At this point in the game there is nothing much else to say. This series is definitely a drug. I LOVE the anticipation and mystery regardless of how much it pisses me off. 🙂

*Note: This review was originally written in September, 2011*