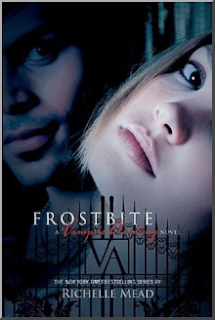 Rose loves Dimitri, Dimitri might love Tasha, and Mason would die to be with Rose…

It’s winter break at St. Vladimir’s, but Rose is feeling anything but festive. A massive Strigoi attack has put the school on high alert, and now the Academy’s crawling with Guardians—including Rose’s hard-hitting mother, Janine Hathaway. And if hand-to-hand combat with her mom wasn’t bad enough, Rose’s tutor Dimitri has his eye on someone else, her friend Mason’s got a huge crush on her, and Rose keeps getting stuck in Lissa’s head while she’s making out with her boyfriend, Christian! The Strigoi are closing in, and the Academy’s not taking any risks… This year, St. Vlad’s annual holiday ski trip is mandatory.

But the glittering winter landscape and the posh Idaho resort only create the illusion of safety. When three friends run away in an offensive move against the deadly Strigoi, Rose must join forces with Christian to rescue them. But heroism rarely comes without a price…

I liked this second installment of the Vampire Academy series much better than the first. The story is already established, you know who’s who, you know the lore, so none of that introduction gets in the way. The action starts right away and you get to jump right in.

The character development is great, I found Rose grows up a lot in this book, but who wouldn’t with what she went through. The chemistry between her and Dimitri is fantastic – very sexy and often frustrating. And some of the other characters are a great addition to the story, especially Adrian who is introduced in this book. Christian, whom I didn’t like in Vampire Academy, has started to grow on me in Frostbite. However, Lissa is still a bit dull. I don’t know exactly why. I’m just glad she’s not the narrator.

The ending is a bit harsh. It’s sad; gloomy, but I think necessary. It can’t all be happily-ever- afters, right? I don’t like to put spoilers in my reviews so that’s all I will say about it. The only complaint I have are the recaps included in the book to remind us of what happened before. They’re a bit drawn out and boring for those of us who have read Vampire Academy not too long ago.

Previously reviewed in the series:
1. Vampire Academy by Richelle Mead