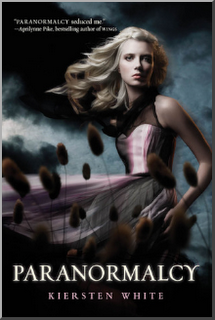 Weird as it is working for the International Paranormal Containment Agency, Evie’s always thought of herself as normal. Sure, her best friend is a mermaid, her ex-boyfriend is a faerie, she’s falling for a shape-shifter, and she’s the only person who can see through paranormals’ glamours, but still. Normal.

Only now paranormals are dying, and Evie’s dreams are filled with haunting voices and mysterious prophecies. She soon realizes that there may be a link between her abilities and the sudden rash of deaths. Not only that, but she may very well be at the center of a dark faerie prophecy promising destruction to all paranormal creatures.

So much for normal.

This is the book that you read when you need a break from dark, serious, hefty novels and just want something fun! Paranormalcy not simply about vampires, or werewolves, or faeries, it’s includes ALL of them- and more. I really had a great time with it and enjoyed the medley.

Evie can see paranormals: No matter what glamour they wear, she can see through it. She’s been living with the IPCA, an agency who controls the paranormals, all her life and feels pretty lonely being the only (human) teenager there. Evie is an incredibly fun character. She has wit, spunk and a definite sense of humor. I loved how she gets excited for the smallest things – like lockers – and we get to see her take in the real world. I also didn’t get an annoyed teenager vibe from her. Evie is very mature for her age which I imagine comes from being raised by IPCA as well as seeing unimaginably icky things daily. However, it doesn’t change the fact that she longs for a boyfriend like on her favourite show, and wishes she could just go to real high school prom.

Evie soon meets a very intriguing love interest, Lend. He’s like nothing she’s ever seen before – literally. I loved Lend. He’s the type of noble guy that you can always count on. His relationship with Evie is not instant either, it progresses at a great pace where you can see and feel their attraction grow. I was also delighted with the lack of a love triangle. I enjoy love triangles as much as the next, but sometimes it’s nice to get a change of pace.

As for the plot, it’s just plain fun! Vampires, fairies, mermaids, werewolves, wookies, you name it. Don’t expect anything too deep or elaborate, but do count on a lot of attitude, pink weapons and interesting twists! And all of this in a quick, satisfying read.