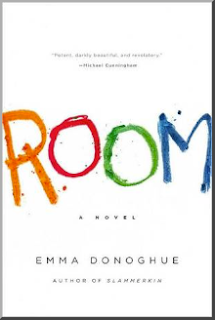 To five-year-old-Jack, Room is the world. . . . It’s where he was born, it’s where he and his Ma eat and sleep and play and learn. At night, his Ma shuts him safely in the wardrobe, where he is meant to be asleep when Old Nick visits.

Room is home to Jack, but to Ma it’s the prison where she has been held for seven years. Through her fierce love for her son, she has created a life for him in this eleven-by-eleven-foot space. But with Jack’s curiosity building alongside her own desperation, she knows that Room cannot contain either much longer.

Room is a tale at once shocking, riveting, exhilarating–a story of unconquerable love in harrowing circumstances, and of the diamond-hard bond between a mother and her child.

Wow, this was an amazing book! Brilliantly written, Room is narrated by Jack, a 5 year old boy, of which I was skeptical at first, but he is the perfect narrator for this story! When I started Room, it was a bit strange, however after only 10 pages I got used to to Jack and his way of thinking and found it incredibly realistic from a child’s point of view, but not simplistic or obnoxious like some may expect. Being in Jack’s mind makes you see how a child takes in and makes sense of things that they don’t understand. It’s quite comical at times, but it’s also surprisingly deep and emotional.

I don’t want to give away why they’re in the Room, but imagine a 5 year old boy who’s never seen anything but a 12x12ft room that he lives in with his mom (never even felt wind!). To him, that room is the whole world. They have a TV, but things in TV are make believe and on its own planet. But then, because he’s 5 now, Ma “unlies” and explains that Outside is real, and what’s in TV is actually outside – No way Jose! I wish I could say more but I don’t want to give anything away, and this is a story that the less you know about beforehand, the better experience you will have reading it. Just keep in mind that this is Not a suspense or mystery (see the last paragraph of the blurb)!

I read the book in 2 sittings. I couldn’t put it down, and when I did I was constantly thinking about the story and pondering it. It’s awful to know that things like this actually does happen and how confusing it must all be for a child so young and innocent.

I very highly recommend this book! I can’t say it better than this quote on the cover:

“Room is a book to read in one sitting. When it’s over you look up: the world looks the same but you are somehow different and that feeling lingers for days.”