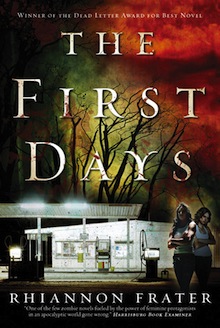 *This review is part of Zombies vs Unicorns month co-hosted with Literary Exploration, YA-Aholic and YA Bookmark.*

Zombie stories are my guilty pleasure. They’re exciting, full of action, gory, but they terrify me to bits. Surviving a zombie apocalypse is no easy feat. So, as expected, I read this with my heart pounding from start to finish, knowing that these people are most likely doomed no matter what, because zombies always win… always. It was such a rush!!

An incredibly frightening zombie story- The First Days, as the title conveys, starts at the very beginning of a zombie apocalypse. People are getting bitten, then turn on others to feed. No one knows what’s happening, but after Jenni sees her family succumb to this horror, she flees. This is not easy for her. Being a mother myself, that beginning is incredibly heartbreaking. I just kept imagining being in her shoes, seeing my children turn into monsters in front of my eyes. Uncomprehending. The tangible emotions in this story is a big part of why it’s such a chilling read. It makes it extremely realistic. The setting, the pace, the reactions; it’s all how I imagine it would happen if the zombocalypse were to start today. It really makes you think.

We meet a lot of different types of personalities during this story. The panicked, the determined, the optimist, and the destroyed. Rhiannon greatly portrays how society would react to such terror. Our protagonists are two strong females who go through remarkable depths to help each other, as well as strangers they meet down the road. These women are incredibly intelligent. They don’t let their emotions turn them incompetent- which is the only way you’re able to survive in this new world. I grew immensely fond of both of them. I even felt like I knew them; they were so real. We also have a band of eccentric supporting characters who make their way into these women’s lives. Each one adds a little bit of charm, even humor, to this otherwise somber story. I didn’t care much for the added romance in the novel, though. It felt a tad artificial, mostly due to its hastiness. However, I realized afterwards that people in such situations would have a tendency to develop feelings at an accelerated pace, hence making theirs probable. It also does give a nice breather from the constant anxiety and panic, so it was never seen as a negative point.

Zombie movies are all about horror and gore, but The First Days is so much more. You will grow to know and care for these people. You will see how, in a zombie world, new rules have to apply, hard choices have to be made, you can’t take ANYTHING for granted, and no one is safe, ever. It will strip you to the core!

As The World Dies trilogy:

38 Responses to “Review: The First Days by Rhiannon Frater”