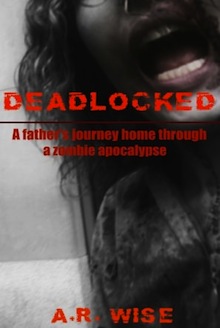 David was caught in the middle of the city when the zombie outbreak started. His wife and daughters were at home, stranded on the roof as zombies waited below. He would have to fight through hordes of undead, merciless other survivors, and a series of death defying stunts to get home. However, even if he makes it there, how can he be sure they’re safe?

Deadlocked puts you into David’s head as he struggles to get home. Then a final confrontation occurs that will guarantee his family’s survival, but at what cost? 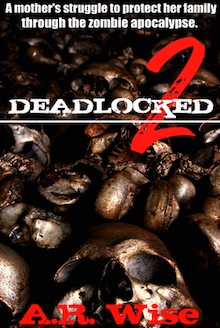 Part two of this series picks up immediately after the end of the first. David’s wife, Laura, is forced to take over the protection of their family as the boat travels out into Hailey Bay, away from the zombies. However, the boat’s pilot plans to dock back in the overrun city to rescue his own family, which will put Laura’s in jeopardy.

Laura is forced to overcome unimaginable horrors as the zombie apocalypse explodes around her, but it is the evil intent of the humans around her that present her greatest challenge. The reader is taken far beyond the edge of their seat as Laura pushes forward to the inevitable end. No one is safe in a world where the dead hunt the living.

*Copies were provided by A.R. Wise for review purposes*
Note: This is a combined review of book 1 and 2 of the Deadlocked series.

A zombie apocalypse is far from a unique plot. George Romero made his epic zombie movie way back in 1968 and it’s safe to say we’ve had our share of undead cannibals since. A.R. Wise tackles this widely used horror icon by giving us novellas from different point of views that, although short, are stacked with emotions, horror and realism.

As I mentioned, you can only go so far with originality in zombie stories, but I have to admit that this series has some twists that I never would have even dreamed of. Some are heartbreaking, others are disturbing, but it all comes down to realistic representation. I’m sure I’m not the only one who finds most zombie movies more amusing than scary, simply because they’re either cliché or outrageous. In Deadlocked, we’re sent on a journey with a family who is bent on surviving, and A.R. doesn’t shy away from the truth of how it would be. He shows us how Zombies are never the only ones to fear either. With everyone in a panic, some would go to great lengths to get what they need, losing all sense of humanity in the process. This one’s not for the faint of heart!

We first meet David when the zombie apocalypse starts. We go with him while he’s trying to get from his office to his family in the midst of this chaos. Then in book 2, we’re following the story through Laura’s eyes – David’s wife and mother of his two small children. Both of these characters go through unimaginable ordeals to save the ones they love. David’s story is a great start, but I enjoyed book 2 the most. We’re thrown in the middle of the apocalypse where every page is filled with high speed survival. I also found Laura’s character growth remarkable. She turns into this power house survivor that would do absolutely anything to save her kids. I found it admirable. It also makes us wonder how we would fare in her shoes. Would we be strong enough to survive?

As every installment is from a new point of view, we get to experience this gruesome apocalypse through different eyes, which gives us an original take on how different minded people perceive such horror. Written as novellas, the Deadlocked hands gives us quick, highly intense stories that I would recommend to any zombie fan out there.

Along with my review I have A.R dropping by to tell us a bit about why zombies are so scary.

The Value of a Good Zombie
Why do we love zombies? There are hundreds of different monsters to choose from, but these undead shamblers continue to delight us. Readers go back to the well over and over, even though we’re pretty certain it’s been tapped. Why is that?

I chose to write a zombie story for two reasons: A friend of mine was convinced he would never like another zombie book, and I was struggling to deal with my mother’s cancer. I decided to write Deadlocked, a novella series, as a way to take on my friend’s challenge, but also as a cathartic exercise in dealing with my mother’s illness. In doing this, I stumbled upon the secret that makes zombies an indelible bad guy:

Zombies are a constant reminder of our own impending death.

This is the reason they have become a genre unto themselves: no other monster can contend with the emotions these shambling corpses subliminally stick in our heads. Every time a protagonist faces off with a zombie, they are staring at their own inevitable demise. We will all die, and every minute of every day is yet another step into our own grave. When we look into the face of a zombie (a decaying, disgusting, vile human face) we are looking into a mirror at our future selves. Kind of creepy, isn’t it?
Also, don’t forget that zombies eat people – that’s pretty terrifying too!

A good zombie story is less about the zombies, and more about the struggles of the characters trying to survive. There are a lot of great zombie stories that create a pulse-pounding plot by simply throwing characters into a zombie filled area and letting the story tell itself. However, I think the best zombie tales are the ones that tell a larger story. I want to read about characters that are more than just action heroes.

Deadlocked starts with a father that has recently learned he might have cancer. From there, the world turns upside down as zombies take over, but I wanted to use the living dead as an analogy to the main character’s crushing realization that he is going to die. Don’t worry, the apocalypse isn’t just in his head, but I wanted this to be a story about how this father will do anything to protect his family in the face of death. The entire story is designed around the idea that the protagonist is trying to make sure his family will be safe after he’s gone. When you look at it from the viewpoint of someone with terminal cancer, instead of someone simply frightened of being eaten, you see many parallels. He wants to make sure they are safe and provided for after his death.

In George Romero’s best zombie films, he uses the undead as a thinly disguised metaphor for some part of the human condition. Night of the Living Dead is as much about racism as it is about zombies. And my personal favorite, Dawn of the Dead, is a thinly veiled discussion on modern consumer culture. These underlying plots are what make those movies classics. The zombies are there to scare us, but they mean so much more.

When you see a rotting corpse in Dawn of the Dead, you’re seeing the storyteller’s attempt to equate consumerism and death. Romero is asking you, without having to ask, “What do all your possessions matter when you’re dead?”

In Night of the Living Dead, when those creatures outside are threatening to eat the occupants of that house, Romero is asking you, “What does it matter what skin color you are when you’re dead?”
You’re going to die – and there’s no monster out there that more fully embodies that inescapable truth than a zombie. THAT’S why they scare us.

…And they eat people. Gross.

This post is part of Zombies vs Unicorns month co-hosted with
Literary Exploration, YA-Aholic and YA Bookmark
The following two tabs change content below.