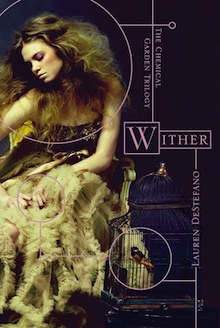 By age sixteen, Rhine Ellery has four years left to live. She can thank modern science for this genetic time bomb. A botched effort to create a perfect race has left all males with a lifespan of 25 years, and females with a lifespan of 20 years. Geneticists are seeking a miracle antidote to restore the human race, desperate orphans crowd the population, crime and poverty have skyrocketed, and young girls are being kidnapped and sold as polygamous brides to bear more children.

When Rhine is kidnapped and sold as a bride, she vows to do all she can to escape. Her husband, Linden, is hopelessly in love with her, and Rhine can’t bring herself to hate him as much as she’d like to. He opens her to a magical world of wealth and illusion she never thought existed, and it almost makes it possible to ignore the clock ticking away her short life. But Rhine quickly learns that not everything in her new husband’s strange world is what it seems. Her father-in-law, an eccentric doctor bent on finding the antidote, is hoarding corpses in the basement. Her fellow sister wives are to be trusted one day and feared the next, and Rhine is desperate to communicate to her twin brother that she is safe and alive. Will Rhine be able to escape–before her time runs out?

Together with one of Linden’s servants, Gabriel, Rhine attempts to escape just before her seventeenth birthday. But in a world that continues to spiral into anarchy, is there any hope for freedom?

Dystopian societies- we’ve seen all kinds. From post apocalyptic hell on earth to life in plastic (yes, this is an Aqua reference >.<). In Wither we fall somewhere in the middle. While trying to cure cancer, society has caused the next generations to die from an unknown virus at 20 years of age for girls, 25 for guys. Is this concept intriguing? Definitely! Everyone has a fear of dying. Since most YA readers are approaching, or are over the age of 20, this world can easily be terrifying when we put ourselves in their shoes.

With such a short lifespan, the human race has gone into baby-making overdrive. Girls are being kidnapped, married off in polygamous marriages, forced to bare children as soon as they’re physically capable. I found this strangely fascinating; it’s not inconceivable. With all these new vaccines and diseases, who know what it will bring to our future generations. I do wish we would have delved deeper into the world building of Wither. How society lives in the bigger picture. For the duration of the book, we’re stuck inside a house with these characters, and like them, we don’t get to know what’s happening outside these walls. Thus, we only skim the surface of this new world while we wander around the mansion lost in thought. As a result, I felt it was very slow moving for the most part. I never found myself bored necessarily, but I wasn’t eagerly turning the pages either. The ending however, does promise a more exciting sequel that I’ve been told is much more fast pace. I’m still genuinely looking forward to continuing the series.

A big reason why I never lost interest during this slow-moving story is the easy to like characters inside this house. The three young wives quickly form strong bonds. Joy, worry, and heartbreak are clearly felt for each other and I couldn’t help but grow fond of their attachment. What also kept my interest was the ominous father-in-law who has dark secrets we’re slowly carving into. He’s controlling and vicious. I’m sure we haven’t seen the last of him.

While the other girls are occupied having babies and playing house, our protagonist, Rhine, finds solace in Gabriel, a house servant. I never exactly felt sparks between these two. However, I still found it to be a realistic, incredibly romantic relationship. I think they could grow to develop great chemistry, but since we see so little of him in Wither the passion so far is almost non-existent.

As a big fan of dystopians, Wither does not live up to the ones I’ve been devouring lately, but it still has an enticing, unique premise with definite potential to become much more exciting in the books to come.