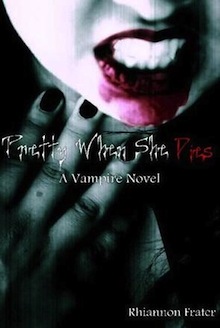 Amaliya wakes under the forest floor, disoriented, famished and confused. She digs out of the shallow grave and realizes she is hungry…

… in a new, horrific, unimaginable way…

Sating her great hunger, she discovers that she is now a vampire, the bloodthirsty creature of legend. She has no choice but to flee from her old life and travels across Texas. Her new hunger spurs her to leave a wake of death and blood behind her as she struggles with her new nature.

All the while, her creator is watching. He is ancient, he is powerful, and what’s worse is that he’s a necromancer. He has the power to force the dead to do his bidding. Amaliya realizes she is but a pawn in a twisted game, and her only hope for survival is to seek out one of her own kind.

But if Amaliya finds another vampire, will it mean her salvation… or her death?

What would you do if you woke up buried in the ground? Well Amaliya first took a shower (duh!), then what comes next involves blood. Lots and lots of blood.

Left on her own to find out what she is, and how to survive it, Amaliya has a pretty rough beginning into her new vampiric life. However, she soon proves to be a pretty bad-ass heroine by, well… improvising. She’s a fighter through and through. Instead of whining about her horrible situation, she goes out there and figures it out. Embracing it, even. Which I found especially awesome. It’s not without a kill or two… or three, but eventually, she finds another of her kind. This is where Cian comes along.

Cian is centuries old, and the master of Austin. He doesn’t know what he’s getting into when he decides to take Amaliya under his wing. Let me just tell you, it gets hot. Very hot! That is, until Samantha – Cian’s human fiancé – and his servant Roberto comes along. Things get very cold, fast. Neither wants Amaliya around, so as you can guess, you can also expect plenty of back-stabbing and betrayals. As usual, good or bad, all the characters are incredibly well written and perfectly flawed. Even the side characters play a major role in the story. I can’t fail to mention Sergio and Grandma which, with their humor and charm, became instant favorites.

“It’s the irony of being a vampire. Being immortal and being terrified of death.”
-Quote in Pretty When She Dies

Gritty and dark, the vampire lore in Pretty When She Dies sticks to the original blood drinking, day sleeping vampires; they’re dangerous and violent. I loved the overall world building, in particular, the addition of necromancy (which means we also have some zombies!) that shakes it up a little giving us an extra twisted plot and epic fight scenes. This necromancer – they call him The Summoner – can not only call on, and control, an army of undead, he’s also a wickedly malicious and extremely old vampire. This makes him highly powerful as a villain. Believe me, he won’t fail to intimidate you. How about this: To lessen his boredom, he creates vampires to set free, stalk, then kill. That’s not barbaric at all… This book is definitely not without its fair share of action.

I continue to be blown away by Rhiannon’s crack-infused pages; keeping me glued to her words. Combining classic vampire lore, horror, and romance – she has given us another astonishingly compelling read.

Pretty When She Dies is currently FREE!
Click on banner below to get your copy!

30 Responses to “Review: Pretty When She Dies”