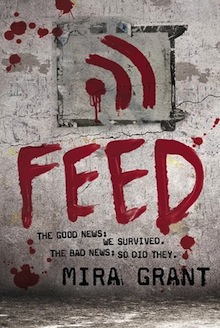 “The zombies are here, and they’re not going away, but they’re not the story. They were, for one hot, horrible summer at the beginning of the century, but now they’re just another piece of the way things work. They did their part: They changed everything.”
-Quoted from finished copy of Feed

If you’re looking for a simple zombie book, this ain’t it. Filled with political intrigue, conspiracies, and a long, tedious political campaign — amidst a zombie-filled post apocalypse world, of course — Feed is intelligent, it’s intense, and though some may find the first half a little long winded, it’s completely worth it! A few things I learned once I started reading is 1) this is not a young adult novel; and 2) it’s not about the zombies.

The very first thing I noticed going into this book was the exquisiteness of the writing. The narration being notably mature and quick-witted makes it an exceptionally smart novel that is just a breath of fresh air. I felt intelligent just by reading Mira’s words. This fantastic prose comes together with outstanding world building and amazing characters that become so real you can’t help but get emotionally invested. Mira proves, via generous scientific details and infinite facts, that she has done her research through and through, bringing about a world filled with science and technology that turns this zombie apocalypse into a real threat with push beneath it, making it plausible and indefinitely scary. As it’s a more technical and political novel especially during the first half, this “info-dumping” — for lack of a better term — could be a bit dry for some tastes, however, as someone who loves to absorb all this geeky information that essentially makes it one of the most realistic zombie novel I’ve ever read, I was kept thoroughly engaged in it from the start. Howbeit, I wasn’t disappointed when we hit that half way mark and the shit hit the fan! Because once the ball starts rolling on this one, it rolls non-stop until we arrive at one of the the most shocking endings I’ve read, making me idolize Mira for this daring conclusion.

Working a political campaign that turns deadly, the team of bloggers (aka news media) selected to travel with a candidate find themselves in the midst of it all. The leader of this group, Georgia, is our resourceful protagonist who can slap someone silly with her indestructible retorts, and shimmy her way into finding out any and all answers. She wants justice, and she’s determined to get it! I loved every single thing about this girl. She has such vibrancy no matter if she’s dealing with the campaign, her relationship with her adoptive brother, or writing her blog posts. Her voice oozes out this aptitude that makes her a warrior through and through. Her adoptive brother and best friend, Shaun, is also an incredible character who has the more silly, down to earth side of the coin that will make you chuckle, but he also shows his multi-layered personality through his blog postings from his perspective that we get at the end of several chapters. Working with this duo is a whole team of bloggers that — even those we only glimpse at regularly — all become strong players in this dangerous game.

In the end, as the quote at the beginning states, it’s not really about the zombies, it’s a political thriller set in a post apocalyptic future where zombies run rampant. Still, the zombies do heighten the intensity of the plot, making is constantly exhilarating as you never ever feel safe. There are a million ways to die in a zombie novel, and this one is no exception.