Today I have the lovely Laura on the blog for the Blind Spot blog tour. She’s here to introduce us to her characters, and you can then enter to win a great prize pack! Look for my  review of Blind Spot on the blog next week! 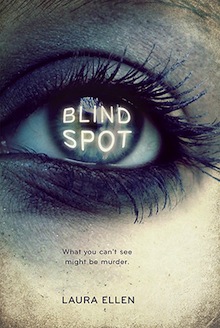 Thanks for the cup of Xpresso and the warm welcome Giselle. It’s so exciting to be here on tour now that Blind Spot is finally out. I heard you like Dream Cast posts 🙂 so . . . I thought I’d talk about my cast of characters – and then open it up to readers to nominate celebs to play them. Sound fun? We’ll announce the nominees as well as my own ‘Dream Cast’ over at Alluring Reads on November 1.

In real life, we don’t have the luxury of identifying bad guys by their joker masks and good guys by their superhero capes, which makes it tough, because people aren’t simply one or the other — ‘bad’ guys still do good things, and ‘good’ guys still do bad things. So, we have to rely on our instincts to figure out who to trust. We go by body language and facial expressions when interacting with someone; we note whether they are making eye contact or not, and whether their actions match their words.

What if you couldn’t see actions, body language, and facial expressions though? What if you couldn’t actually look someone in the eyes to see if they are being truthful – or make them believe you are being truthful? What if everything you saw was distorted, the center blocked out, so that your brain had to make sense of what it was seeing, and it didn’t always get that right?
Would you feel insecure about yourself and your instincts? Self-conscious? Unsure who to trust – including yourself?

That’s what the main character in Blind Spot, Roswell ‘Roz’ Hart must deal with every day because of her visual impairment. She has macular degeneration which blocks her central vision and her lack of vision makes her frustrated and insecure. But she’s also very stubborn – perhaps too stubborn – refusing to ask for help even when she needs it. She loves music and loves the ‘unknown’ – her father chases UFO sightings and sends her the photos, which she has displayed on the ceiling above her bed.
I guess if I had to specify, I’d say Roz has brown hair and green eyes, not intense green, just green – but I tried to leave physical descriptions of Roz to a minimal because Roz doesn’t see herself as other see her – and she’s telling the story. Roz spends very little time on make-up and hair, it frustrates her, but she does enough to look nice, to blend in, because it is all about not being noticed for Roz. She simply wants to be like everyone else. She wants to feel ‘normal’.

Tricia Farni is the girl who is found dead in this story, but unlike most mysteries/thrillers, readers get to know Tricia and her love-to-hate-you relationship with Roz long before Tricia disappears. Tricia is Roz’s special ed classmate and a pain in Roz’s side. They are partners in the class, but far from friends. Tricia is a drug addict and emotionally disturbed. She wears a brown hooded cloak every day that she twirls around in and dresses provocatively underneath. She has stringy blonde hair, pale skin, and dark eyes outlined too heavily in black kohl eyeliner. Tricia’s a loner and a bit broken, but she’s tough as nails and Roz admires that.

Greg Martin knows his way around the academic arena – always quoting TS Eliot and other authors/philosophers – and he’s more worried about his GPA than his social game. He tends to be judgmental because he is confidant and sure of himself – except when he’s around Roz. He’s been in love with her since they were kids (although Roz is unaware of this) and he can be shy and a bit of a bumbler around her. He is very tall, and despite his pressed dress slacks, button-up collar and sweater, he can be clumsy and a bit of a mess. His dark brown curls are usually out-of-control and more often than not he’ll have a smudge of ink on his face, He chews watermelon bubble gum constantly and shares Roz’s love of music and the ‘unknown’.

Jonathan Webb is the hockey stud of the school that everyone wants to be around. He’s a smooth talker and can make any girl think she’s his one and only. He is the teacher aide in the special education class that Roz and Tricia are both in. He has dark hair, is very athletic, wears NHL jerseys and jeans most of the time and he has a killer smile that can make you do anything for him.

Mr. Dellian is a young (early thirties) history and special education teacher as well as the hockey coach. He is very pretentious and condescending, especially with Roz, and goes out of his way to make Roz’s life miserable all in the name of teaching her a life lesson. The suspected inappropriate relationship he has with Tricia becomes Roz’s focus as she tries to discover what happened to Tricia the night she disappeared.

There are other characters, but this is the main cast. If Blind Spot ever became a movie, who do you think would play these characters the best? I have a few ideas which I’ll share on November 1st at the Alluring Reads stop, but we want to see what celebs you’d pick!

Leave your nominees in the comment section and you’ll automatically be entered to win the Character Swag Bag I’m leaving with Giselle. Want to also win a signed hatdcover of Blind Spot? Be sure to enter over on my website.

Before I go, I have the second winner in my ‘Blogger Love’ Giveaway:
Congratulations, Winter Haven Books, you’ve won a bag of swag from a ton of authors, plus your choice of either a blog badge/button designed exclusively for you by Giselle ($15 value!) or a book of your choice ($15 value). Bloggers, there’s still time to enter for your chance to win too! See the details here.

Laura Ellen is a full-time writer and mother of three who began her career as a teacher in both Language Arts and special education. Diagnosed with juvenile macular degeneration as a teen, she drew upon her own experiences with vision loss to write her debut YA thriller Blind Spot, an emotional and suspenseful page-turner. Born and raised in Fairbanks, Alaska, she recently moved across country from Ann Arbor, Michigan to Scottsdale, Arizona.

Giveaway
Laura Ellen has generously offered a swag bag for giveaway. It will include a Blind Spot notebook, magnet, bubble gum and signed bookmarks.
Open to US & Canadian addresses
Giveaway ends November 2nd, 2012
Use the Rafflecopter below to enter
a Rafflecopter giveaway
The following two tabs change content below.