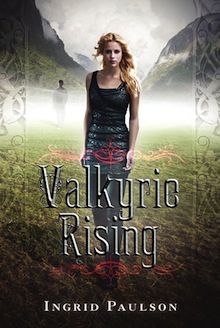 Nothing ever happens in Norway. But at least Ellie knows what to expect when she visits her grandmother: a tranquil fishing village and long, slow summer days. And maybe she’ll finally get out from under the shadow of her way-too-perfect big brother, Graham, while she’s there.

What Ellie doesn’t anticipate is Graham’s infuriating best friend, Tuck, tagging along for the trip. Nor did she imagine boys going missing amid rumors of impossible kidnappings. Least of all does she expect something powerful and ancient to awaken in her and that strange whispers would urge Ellie to claim her place among mythological warriors. Instead of peace and quiet, there’s suddenly a lot for a girl from L.A. to handle on a summer sojourn in Norway! And when Graham vanishes, it’s up to Ellie—and the ever-sarcastic, if undeniably alluring Tuck—to uncover the truth about all the disappearances and thwart the nefarious plan behind them.

“The first new Valkyrie in a thousand years.” The voice stopped me in my tracks. In my relief and happiness at driving off Odin, I’d forgotten all about Loki. Unfortunately, my memory lapse wasn’t mutual.

“You’re brave to show any of your faces here, Loki,” Astrid growled, shifting in front of us.

“Thank you.” A smile curled Loki’s lips. “But it’s not particularly brave to show up for a fight you’ve already won.” His eyes found mine, and he winked. “You’ve done beautifully, Elsa. Exceeded my expectations. Even I didn’t think of branding Odin. Your only mistake was letting him escape.”

“Mistake?” Astrid glared at Loki long and hard. “Ellie doesn’t answer to you. Or anyone. Odin did what any wounded general would do when facing unfavorable odds. Retreat and regroup. Live to fight another day. We would never dishonor him by giving chase.”

“I want Odin,” Loki told me. He waved one hand behind himself, indicating the whole town. “This whole debacle more than establishes Astrid’s incompetence. She’s not strong enough to keep him under control.”

“Neither can you,” Astrid snapped, taking a step forward and looming over Loki by half a foot.

“On the contrary,” Loki purred. “I’ve been saving a special surprise for him. Courtesy of the same wise women who relieved Odin of his eye in exchange for his supposed wisdom. For all the good it gave him. Odin should have traded that eye for cunning instead. Then perhaps he would have fared better today.” The crowd in the street was too caught up in reunions to notice what was happening, this new, unwelcome
turn of events. Except for Margit, who started to approach warily, eyes widening in disbelief at the ever-shifting landscape of Loki’s face. I held up one hand, warning her to stay back.

“You can’t control Odin without me,” Loki said, crossing his arms. “You have no choice. I made sure of that.” Again Astrid was wavering. She didn’t know what to do about Odin, especially since her switch in allegiance was still new and raw. But no one in their right mind would trust Loki.

“Yes, you do,” I said, my idea still crystallizing as I spoke. “Just leave Odin alone.” My grandmother was the only one whose eyes didn’t widen at my words. “He traded his eye for wisdom. Maybe we give him a chance to put it into practice. Let him travel. Learn. Come to grips with how the world has changed.”

“Odin tried to make me kill Tuck?” Graham asked, rubbing his head like he could massage his brain back into
full working order. “We can’t let someone like that just wander around. Seems irresponsible. Was that really Odin like Odin Odin? I can’t believe I’m having this conversation.” I put a hand on Graham’s shoulder. “It’s okay,” I said. “It’ll take more than five minutes to catch up to the events of the past thirty-two hours. Even for you.” Astrid was nodding slowly to herself, her eyes scanning the road that led to Valhalla.

“Odin might be the god of war, but he’s also the god of knowledge,” I added. “And I remember enough of Grandfather’s bedtime stories to know he wasn’t always cruel. Maybe time will help him figure out that the modern world is okay as it is.” Tuck’s fingers squeezed mine. “Right. He can learn to surf. And if that’s not enough to satisfy his megalomania, maybe take over a few South American countries?”

“I’m serious,” I said, elbowing him. “We don’t have any other option. He’s immortal. He’s got powers I can’t even begin to understand. It’s not like we can just lock him in our bathroom. And Loki . . . well, you can bet whatever he’s up to will cause more problems than it solves.” Loki’s face twisted in abject fury. I was pretty sure he would rip out my throat on the spot if he weren’t so outnumbered.

Ingrid Paulson lives in San Francisco with her husband and daughter and enjoys long-distance running, eavesdropping, and watching science documentaries. She has always loved books and writing short stories, but was surprised one day to discover the story she was working on wasn’t so short any more. VALKYRIE RISING is Ingrid’s first novel.

Ingrid’s grandmother might actually be a Valkyrie; she’s still waiting for her to come clean.

Giveaway
As part of the blog tour, there is a signed copy of Valkyrie Rising up for grabs!

Open to US addresses only

Giveaway ends October 20th, 2012
Use the Rafflecopter below to enter
a Rafflecopter giveaway
The following two tabs change content below.