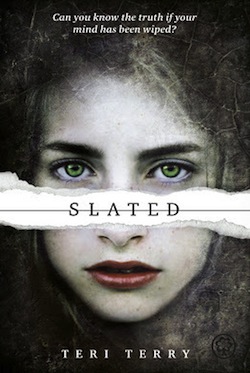 Kyla’s memory has been erased,
her personality wiped blank,
her memories lost for ever.

The government claims she was a terrorist, and that they are giving her a second chance – as long as she plays by their rules. But echoes of the past whisper in Kyla’s mind. Someone is lying to her, and nothing is as it seems. Who can she trust in her search for the truth?

From the moment I saw this creeptastic cover I knew I had to read it! Slated also deals with memory loss which has always been a fascinating subject to me in addition to ensuring that the story will be both creepy and mysterious. This novel brings it on both fronts. The mystery vibe is kept immensely high with the regular visions/dreams of her apparent past, leaving me to absolutely devour every page of it!

Unlike any dystopian I have read, Slated introduces a world not very unlike our present, but where teenage criminals are being Slated—wiped of their memories to start over. To punish them further, their mood is monitored and they have to deal with grave consequences if they lash out or become angry/moody. This way of life is fantastically creepy as the reader is aware of just how much control the government can have with this arrangement. You are never any more vulnerable than with a swiped memory! I was kept on my toes with the mystery of it all, becoming almost giddy every time we warped into a vision or dream that might possibly give us another glimpse into her past.

This leads me to the one disappointment of the book: the answers were not nearly enough for me. Or rather, we get no answers. We get quick visions of her pre-slated life that bring up more and more questions, and even though it works to bring the (fantastic) mysteries of the book to extreme altitudes, it simply isn’t enough. As a consequence, large parts of the world building is kept just as secret. In the end, I was left feeling that the book was simply dissolved. It fizzles into a “To be continued” rather than an ending; there is no pinnacle of events that unravel to give us, at the very least, a slight crack into the mystery. So although I was kept thoroughly glued to this story, the book failed to give the final whomp that it deserved.

Kept at a minimum, the romance is not worth going into details in this review. It’s there, but it’s a very minimal part of the story. I can’t say I developed a high interest in this sub-plot, but it wasn’t an aspect that I would deem negative, either. Though this may change if Terry decides to make the romance a bigger aspect of the sequel.

At least for now, Kyla is the star of the show, and she is kept center stage. Being newly slated, she is a very unique narrator as we don’t know anything about her–and neither does she. She also doesn’t know a lot about the world, like how to open car doors for instance. It’s always a favorite of mine to see reactions of characters who know nothing of our world. I did notice a few discrepancies in her behavior/knowledge, but overall it was highly entertaining.

Recommended for fans of mysteries and thrillers; Slated does require patience in getting some answers, but I guarantee it’s not going to change how engaging this plot is!