Posts Tagged: Pretty When She Kills

Hiya lovelies! I have one of my favorite ladies on the blog today! You all know by now how much she rocks, and that if you haven’t read any of her books you are part of my hit list * to talk about reviews! We all write reviews, we all see the drama behind dealing with authors who can’t deal with reviews, so here’s a look at the other side. But first, zee book: 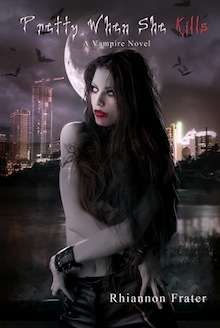 When Amaliya harnessed her necromancer powers to defeat her greatest enemy, she believed she had finally found a happy ending with Cian, her lover and the master of Austin. That happiness is short-lived when the vampire ruling over San Antonio attempts a takeover of Austin in order to capture Amaliya and use her power for his own devices.

To make matters worse, Samantha, Cian’s ex-fiancée, is seeing ghosts, the untested vampire hunters of Austin are running scared as a supernatural war looms, a mysterious man is hunting Amaliya with the help of her one time lover, Pete, and Rachoń, the Summoner’s favorite progeny, appears to be out for revenge.

When Amaliya’s grandmother, a powerful medium, experiences terrible visions that reveal there is another necromancer vampire and she is crying out for help, Amaliya realizes happy endings do not come easily…

Read my review on Pretty When She Dies here!

What’s Up With Reviews
By
Rhiannon Frater

Because of all the insanity that has been surrounding reviews I get a lot of questions about reviews.
So to answer those questions…

• Do you ever pay for book reviews?
This has been the latest blow up over reviews. Some authors, some of them quite famous, have been paying for positive reviews. It’s abhorrent as far as I’m concerned and I will never pay for a review. Even though Kirkus Reviews charges Indie Authors for the chance at a FAIR review, I think even that practice is questionable. Once you admit to paying for a review (even if it’s a fair one), you’re sliding down a slippery slope fast. Why would anyone trust any of your positive reviews again? I do not pay for book reviews and I never will. I do provide eBooks for review to bloggers, but I’m well aware of the fact that they may not like my work.

As for authors creating fake names to praise their own work and drag down other writers with negative reviews, I find this to be utterly deplorable. I have not and will never participate in something so loathsome.

• I noticed you have a lot of five star and four stare reviews. If you’re not paying for reviews, then all of those are your friends and family, right?
Actually, no. When I first self-published the AS THE WORLD DIES trilogy in 2008, I asked some friends to write honest reviews. Only four ended up doing so. I have yet to have a family member write a review for my novels. My mom, my most ardent supporter, has never written an online review for any of my books, though she will talk your ear off about how great they are in the grocery store line. My husband has never written a review for one of my books because he doesn’t think it’s ethical. My three brothers aren’t big readers. One of them has read a few of my books, the other two are still working on THE FIRST DAYS. I recognize that some people do push their friends and family to write reviews. I’m not one of them. In fact, I have realized that most of my co-workers, friends, and extended family members were afraid to read my books just in case they were terrible.

One friend came up to me one day and said, “Oh, my God! I’m so relieved. I read one of your books and it was really quite good! I was so afraid it was going to be horrible and I would never be able to look you in the face again!”

She didn’t write an online review, by the way.

• But how are you getting all those four and five star reviews?
I wrote a book people like. With the AS THE WORLD DIES books I have a whole slew of negative reviews, but the positive ones far outweigh them. With my vampire books, the reviews are consistently a lot higher. THE LAST BASTION OF THE LIVING has the most positive reviews across the board. A few people have told me that fresh perspective is what they enjoyed, so maybe that’s what earns me an extra star or two.

• You must hate negative reviews. They must ruin your sales.
Actually, one of my all-time favorite reviews is a one star review for PRETTY WHEN SHE DIES. I’m convinced it has sold more books than the more positive ones. I have even had fans tell me they picked up the book because of that review. All the things the reviewer hated is what made other readers want to read it.

The reality is that reviews are subjective and people are smart enough to realize that. If a reviewer hates the “blood and gore” in one of my vampire books, that may be the reason someone else will decide to read it.

What adversely affects my sales is no one reviewing my books or knowing they exist. If people are reviewing my novels, that means they’re being read and the word of mouth is getting around.

• So what kind of reviews don’t you like?
If a review is a personal attack against an author, I will stop reading it immediately. Also, if the reviewer skims the book, gets the facts wrong because they skimmed it, and writes a scathing review, those don’t sit well with me either. I’m not too keen on long reviews where the reviewer goes on and on about how they would have written the book, changed the characters, plot line, etc, because at that point the reviewer should just write their own book.

• So how does an author get good reviews?
Write a good book and hope your audience embraces it. There is no secret formula or magical way to get good reviews. It’s almost blind luck that an author writes a novel that a large group of people adores. And even if it’s had a slew of great reviews, a fervent following, and tons of great press, there will still be a segment of the population that will loathe it.

It’s truly sad that the scandals surrounding reviews have now made them all suspect. I look at my books with mostly five and four star reviews and inwardly flinch. Whereas those reviews used to be small trophies of success, I now fear they will be regarded with suspicion and downright hostility.
I’m hoping that soon all this insanity will blow over and people can return to regarding reviews as the honest opinion of readers just like you and me.

Thanks, Rhiannon! I wish a lot more authors would act the same towards reviews. Some can be very… well… *moves away from keyboard* 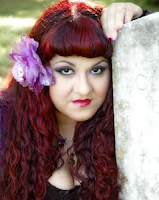 Rhiannon Frater is the award-winning author of the As the World Dies trilogy (The First Days, Fighting to Survive, Siege,) and the author of three other books: the vampire novels Pretty When She Dies and The Tale of the Vampire Bride and the young-adult zombie novel The Living Dead Boy and the Zombie Hunters. Inspired to independently produce her work from the urging of her fans, she published The First Days in late 2008 and quickly gathered a cult following. She won the Dead Letter Award back-to-back for both The First Days and Fighting to Survive, the former of which the Harrisburg Book Examiner called ‘one of the best zombie books of the decade.’ Rhiannon is currently represented by Hannah Gordon of the Foundry + Literary Media agency.

Giveaway
The fabulous Rhiannon has generously offered up an ebook copy of both Pretty When She Dies and Pretty When She Kills for giveaway to one lucky winner.
Open Internationally
Giveaway ends October 11th, 2012
Use the Rafflecopter below to enter