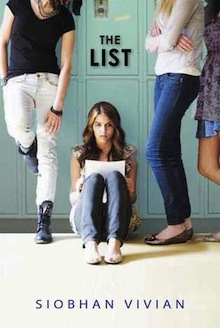 It happens every year. A list is posted, and one girl from each grade is chosen as the prettiest, and another is chosen as the ugliest. Nobody knows who makes the list. It almost doesn’t matter. The damage is done the minute it goes up.

This is the story of eight girls, freshman to senior, “pretty” and “ugly.” And it’s also the story of how we see ourselves, and how other people see us, and the tangled connection of the two.

*A copy was provided by Scholastic Canada for review purposes*
A light, quick read – The List follows eight girls who have been named ugliest or pretties on this “List” which has been posted around the school every year for decades. You think being a “prettiest” would be easy? Think again!

Although The List addresses several teen issues throughout the story, it ended up being a much fluffier read than I expected. With eight different points of view, we’re taken into each of the four ugliest, as well as the four prettiest girls’ lives spanning the week after being put on this List. Each girl has their own personal problems above now having to deal with being the center of attention. We’ve got an eating disorder, overprotective mother, outcast rebel, and of course plenty or romantic issues; all thoroughly interesting, some even deeply serious, but sadly most of these go unresolved leaving us with no idea of what’s going to happen to these girls. I also kept wondering why the faculty had let this go on for so long, especially seeing the damage it does to the girls on it. I have a hard time believing that they simply let it be because it’s a “tradition”. Bullying is not taken lightly; parents would have spoken up years ago where I come from.

We’ve got eight lives to follow, which means a lot of POVs. I had to go back and check the List a few times to remind myself who they were, overall, though, I didn’t find it was too much – having this list handy makes it easy to keep track. However, I’ve always been a fan of multiple perspectives. I found myself really liking the girls, too. They are a fun bunch, all with vastly different personalities that will either enamor or disgust you.

Without getting too profound, this novel is simply about the lives of these girls after they’re hit with a target on their backs. Either prettiest or ugliest, this List doesn’t favor anybody and consequences are dealt with. I wish it would have delved deeper into their lives, maybe have it span longer than a week, but all in all it’s an entertaining read that I would be more inclined to recommend to the younger YA readers.