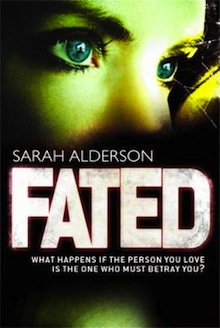 But when the half-human, half-Shadow Warrior Lucas Gray – is sent to spy on Evie and then ordered to kill her before she can fulfil a dangerous prophecy, their fates become inextricably linked. The war that has raged for one thousand years between humans and demons is about to reach a devastating and inevitable conclusion. Either one or both of them will die before this war ends.

If your life becomes bound to another’s, what will it take to sever it?

I thought Sarah Alderson’s Hunting Lila was a really fun book, so I knew I had to read this as soon as I saw who wrote it. Fated has the same feel, but still quite a bit different from Hunting Lila. We now the story of Evie, who just found out she’s a demon hunter; and Lucas, who’s sent undercover to get close enough to kill her.

I have to say that the world Alderson describes is really interesting. Filled with all sorts of species, from Scorpio demons to Vampires. I enjoyed learning about all of these creatures, along with the intriguing history they all share. Evie is a strong and intelligent female character who knows when something just isn’t right. She trusts her instincts even when she’s not aware of it. She was wary of Lucas from the beginning and she knew who to fear. I loved her personality. I loved that she wasn’t careless or whiny even when things seemed to be crumbling down around her. It’s definitely easy to relate to her. It’s also remarkable that in a book filled with side characters, all of them stand out in their own way and give substance to the story instead of simply filling up pages superfluously. Out of all, I think my favorite is Jocelyn. I picture her as a sweet (but tough) old lady who just wants to do the right thing. Her role is small in Fated, though I think she’s going to end up being very important.

The one thing I learned from Hunting Lila, is that Sarah knows how to give us a great, chemistry filled romance. Lucas and Evie meet in unfortunate circumstances. Lucas, sent there as a spy to kill her, soon realizes that it won’t be so easy, since he’s quickly falling for the girl. Awww a forbidden love *dreamy sigh*. The romance is sweet and enticing, however it’s not the central focus. Due to their unconventional situation, their relationship builds up slowly, even to the point where I wish there would have been more. But at the same time I found it was realistic and grew at a natural pace. In the end I felt very satisfied with it.

Exciting plot developments, a fairytale romance and fabulous characters – Fated gives us what we crave! If you enjoyed Hunting Lila, Sarah will charm you once again!