This is a great day today as I have the wonderful Sarah Alderson stopping by as part of her blog tour. I’m sure you’ve all seen her books around the blogosphere, including your one and only over here. If you haven’t read Hunting Lila I strongly recommend it! And now you get to know a bit about the mind behind this fantastic novel! In case you’re not familiar with Hunting Lila, here’s what you’re missing: 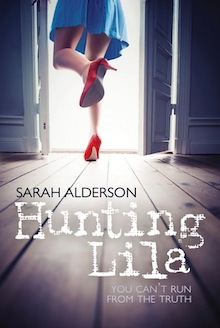 17-year-old Lila has two secrets she’s prepared to take to the grave. The first is that she can move things just by looking at them. The second is that she’s been in love with her brother’s best friend, Alex, since forever.

After a mugging exposes her unique ability, Lila decides to run to the only people she can trust—her brother and Alex. They live in Southern California where they work for a secret organisation called The Unit, and Lila discovers that the two of them are hunting down the men who murdered her mother five years before. And that they’ve found them.

In a world where nothing and no one is quite as they seem, Lila quickly realises that she is not alone—there are others out there just like her—people with special powers—and her mother’s killer is one of them…

Look for the sequel in August!

Q. Let’s start with how you got the idea for Hunting Lila?
I was swimming one day, trying to work out what to do to make some money and bam, I decided to write a book. I’d just read Twilight and figured if Stephanie Meyer could become a gazillionaire writing about vampires then so could I. Except I wanted to make my lead character the one with the super-power and I guess I watch too much TV because I knew I wanted it to be a thriller suspense with lots of action.

Q. Lila is an incredibly well loved character, she’s feisty and irrational at times when it comes to Alex, how did you get the idea for her character? Does she have a bit of yourself in her?
Lila’s character was always just there. I didn’t have to think too hard. I often find I start writing and my characters just exist on the page.

I never thought she was like me but then my dad read it and his first words were ‘she’s so you.’ But then again my dad always refers to all my protagonists as ‘you’ when he talks to me. So yes, I guess she has got lots of me in her. My friends always say they hear me talking when she’s talking. Her dry humour is definitely from me. Probably my husband would say I’m also irrational like her.

Q. Alex and Lila’s relationship is a big part of the book (and a fan favorite); what’s your secret to writing such a swoon worthy romance?
I guess I just really felt it. Writing in the first person I felt every single one of her emotions. And also I’ve had some amazing adventures in my life, and been very lucky to have had some amazing relationships in my life, which I drew on for the romance element.

Q. How many books are you planning on this series? Do you already know how it’s going to end or are you going with the flow?
At the moment there are just the two. It may end there, I haven’t decided yet. I’ve been too busy writing other things.

Q. What’s the first thing you did after you wrote the very last word and realized you had finished a book?
I think I poured myself a glass of wine and then slept. Back then I had no idea if it was ever going to be published so it was a bit of a quiet celebration. Today though I’m just about to finish a book I’ve been writing collaboratively with another author (a hilarious adult book). We are so excited to finish it. So we’re going out to lunch and intend to celebrate in style!

Thanks so much for having me as a part of your tour! If you’re anything like Lila me and you would definitely get along! >.< I can't wait for the sequel, and very intrigued about this adult book! 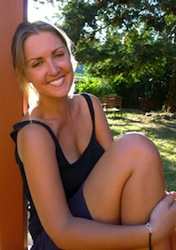 Having spent most of her life in London, Sarah quit her job in the non profit sector in 2009 and took off on a round the world trip with her husband and princess obsessed daughter on a mission to find a new place to call home. After several months in India, Singapore, Australia and the US, they settled in Bali where Sarah now spends her days writing by the pool! She finished her first novel just before they left the UK, wrote the sequel on the beach in India and had signed a two book deal with Simon & Schuster by the time they had reached Bali. A third book, Fated, about a teenage demon slayer, was published in January 2012. Losing Lila, is published August 2nd, 2012.

But when the half-human, half-Shadow Warrior Lucas Gray – is sent to spy on Evie and then ordered to kill her before she can fulfil a dangerous prophecy,…

END_OF_DOCUMENT_TOKEN_TO_BE_REPLACED

17-year-old Lila has two secrets she’s prepared to take to the grave. The first is that she can move things just by looking at them. The second is that she’s been in love with her brother’s best friend, Alex, since forever. Or thereabouts.After a mugging on the streets of South London goes horribly wrong and exposes her unique ability, Lila decides to run to the only people she can trust – her brother and Alex. They live in Southern California where they work for a secret organisation called The Unit, and Lila discovers that the two of them are hunting down the men who murdered her mother five years before. And that they’ve found them. Trying to…