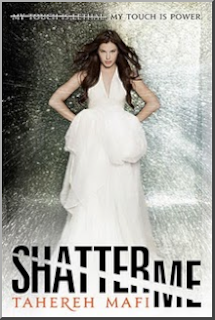 
Juliette hasn’t touched anyone in exactly 264 days. The last time she did, it was an accident, but The Reestablishment locked her up for murder. No one knows why Juliette’s touch is fatal. As long as she doesn’t hurt anyone else, no one really cares. The world is too busy crumbling to pieces to pay attention to a 17-year-old-girl. Diseases are destroying the population, food is hard to find, birds don’t fly anymore, and the clouds are the wrong color.

The Reestablishment said their way was the only way to fix things, so they threw Juliette in a cell. Now so many people are dead that the survivors are whispering war- and The Reestablishment has changed its mind. Maybe Juliette is more than a tortured soul stuffed into a poisonous body. Maybe she’s exactly what they need right now.

Juliette has to make a choice: Be a weapon. Or be a warrior.

I was very excited to have gotten a hold of this ARC. I saw this book a while back and the cover first attracted me to read the blurb, which sounded fascinating. After reading it, I’m happy to say that it didn’t disappoint. It was quite the joyride: an exciting, fast paced dystopia. I’ve been a fan of dystopian novels since The Hunger Games and I’m always happy to find new gems in this exciting genre. I love the exhilaration, the emotional struggle and high speed survival that books like these are filled with.

Juliette has never been able to touch someone without inflicting pain, or worse. When her parents didn’t know what to do with her, they send her away to be locked up an institution. It’s a dystopian world, not so far in the future, where what’s called The Reestablishment is trying to take over, and they want Juliette’s power for themselves.

At first I wasn’t really fond of all the striked out thoughts Juliette was having. They were distracting and I felt like I wanted to skip over them, but worry not, they dissipate towards the middle when she starts getting more rational. I do admit that it does help make her seem frenzied. Which is to be expected from someone with her ability. Being locked up definitely did not help her sanity either. So, though it’s an annoying format, it served it’s purpose.

The writing was respectable. I saw a few minor plot holes here and there, but for a debut author – a 23 year old nonetheless – I was impressed. I found Juliette’s situation to be very well portrayed. You could see that the stress of her situation affected her mentally as well as physically. It was realistic and true. The romance was a bit fast though; your typical YA love at first sight deal. But I looked to my inner teenage lust full heart and I okayed it. 🙂

I enjoyed the fast pace of this book. Weeks go by in a flash of a few pages. This doesn’t always work in novels, but it sets the mood in this one. It does seem to go by faster than expected a time or two, but the story isn’t affected by it and we get to move along with the plot instead of dwindling on idle facts. Towards the end, the story takes on a more casual pace and the world building get more elaborate. We delve deeper in the superpowers and conspiracies of their new age. The second novel should be pretty amazing!

15 Responses to “Review: Shatter Me by Tahereh Mafi”