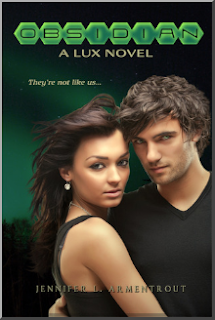 Starting over sucks.
When we moved to West Virginia right before my senior year, I’d pretty much resigned myself to thick accents, dodgy internet access, and a whole lot of boring…. until I spotted my hot neighbor, with his looming height and eerie green eyes. Things were looking up.

And then he opened his mouth.
Daemon is infuriating. Arrogant. Stab-worthy. We do not get along. At all. But when a stranger attacks me and Daemon literally freezes time with a wave of his hand, well, something…unexpected happens.

The hot alien living next door marks me.
You heard me. Alien. Turns out Daemon and his sister have a galaxy of enemies wanting to steal their abilities, and Daemon’s touch has me lit up like the Vegas Strip. The only way I’m getting out of this alive is by sticking close to Daemon until my alien mojo fades.

If I don’t kill him first, that is.

Ok, I have to gather my thoughts now, because this book has blown my mind! I absolutely loved it! This is my first book by Jennifer, but it definitely won’t be my last. I will now stalk all of her work – beware! There is no wonder she has been getting rave reviews so far.

Obsidian gets us acquainted with Katy, who has just moved to a boring small town in West Virginia, and with not-so-boring Daemon – the most arrogant human being she has ever met. And, lucky her (seriously! lucky her!), he lives right next door. At least his sister is great! When Katy finds out they’re all aliens, though, her life kind of gets weird… a little.

I instantly clicked with Katy- and not just because she is a book blogger even though that was awesome -, I found her to be a lot like me. Her reactions, her emotions, her attitude were all very realistic and I could completely relate to her. I particularly appreciated her reaction to finding out Daemon was an alien. First of all, she actually HAD a reaction! Secondly, she questioned it. An improvement over the lame- “Oh you’re a (insert paranormal being here)? That’s neat! So…*awkward silence* wanna make out?”- reactions too often encountered in YA paranormal. As for the secondary characters, I loved Katy’s friendship with Dee: She is a great friend and absolutely a lot of fun. And I was very happy with Katy’s mom who is down to earth, funny and caring.

Daemon, yes, he needs his own paragraph. Daemon is very likely going to end up on the top of everyone’s “most sexiest male character” list. He is definitely on mine! He is irritating, infuriating and downright bullheaded, but holy damn is he ever hot! Daemon is incredibly protective of his sister and others of his race, so even when he was being… difficult, it wasn’t without reason. He did love to push Katy’s buttons and I mostly found it hilarious (though if I was her I would have punched him in the face). What came out of his mouth actually made me gape with disbelief a few times. Despite his loveable personality, he is an incredible character who fits extremely well with the story, even more-so with Katy, and gives it a very attractive vibe.

Together, Daemon and Katy were fantastic. There was enough chemistry between them to give Marie Curie a run for her money! Their relationship was very love/hate. You never knew what Daemon’s intentions were from one page to the next and it drove me crazy as much as it did Katy. However, you still couldn’t help but adore them to pieces.

Now for the plot, I found it was very exciting and well thought out. I really enjoyed Jennifer’s take on the aliens in Obsidian: how they got there, their powers, the villains. It reminded me a bit of Smallville but it was still original and incredibly exciting. The book definitely does not lack in action and the climactic ending was completely fulfilling.

I really have no negative aspect to mention in regards to this book. It was everything I was hoping for and more than I was expecting. No doubt that Jennifer is the up and coming author to watch out for!