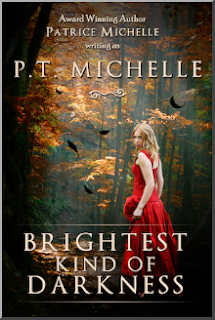 Grappling with her diminishing powers and the need to prevent another disaster, Nara meets Ethan Harris, a mysterious loner who seems to understand her better than anyone. Ethan and Nara forge an irresistible connection, but as their relationship heats up, so do her questions about his dark past.

*A copy was provided by Patrice Michelle for review purposes*
Nara has a very unusual life. In fact, she lives every day twice. Once in her dreams, and again for real. Sounds awesome right? Wrong! It’s boring in the purest sense of the word! Nara is completely over living her life in déja-vu. She only wants to be surprised for once. However, things change drastically when one day she interferes and stops a bomb from going off at school. Her dreams stop, then people start having strange injuries. What is the price of her meddling with Fate?

If there was any reason to use the word “fantabulous”, defining Brightest Kind of Darkness would be it! It’s rare that I get really hooked in a story until at least one quarter through, but this one had me hooked by page 10! It was Nara that did it. I immediately fell in love with Nara’s character. Above being incredibly likeable, Her voice is so realistic that I found myself entranced by her story. I was so captivated by it that I was contemplating how awful it will be for her to now have to live without seeing her day beforehand… How will she possibly live like that!? Yes, I felt stupid for asking myself that, but it shows how it felt like I had been living her whole life in the hour it took to read to that point.

Nara’s wonderful character is not the only reason I was so captivated by this novel. Patrice’s writing flows so smoothly through the pages that you don’t realize you’ve already read half of the book. It’s the type of simple writing that you can read effortlessly but without any repercussions in the depth of the story. The story is quite elaborate with a lot of twists that I never saw coming and had me riveted. What I thought were a few plot holes at first were ultimately clarified and the reveal of the book’s villain was completely original as well as terrifying; his powers are unstoppable! I’m vastly curious to learn more about him and how Nara is going to deal with him in the second book.

Patrice’s Brightest Kind of Darkness also holds a wonderful and enchanting romance. Ethan is adorable, down to earth and charming. I loved him from the start. The romance builds up gradually making it feel genuine and sent my heart aflutter. Him and Nara have fantastic chemistry.

This novel is a must read to any Young Adult readers who like books with a darker paranormal storyline, a sweet romance and a lot of suspense. It is definitely nothing short of ingenuity.

44 Responses to “Review: Brightest Kind of Darkness by PT Michelle”