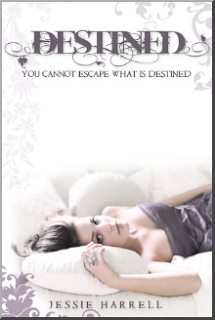 Since I read Percy Jackson earlier this year, I’ve been really interested in Greek mythology. I hadn’t really delved into the subject before. I knew the names and that’s about as far as my knowledge went. But since Percy, I’ve realized how interesting it really is. As soon as I saw that Destined was a retelling of the Eros & Psyche story, I was instantly intrigued by it. Especially since I hadn’t read the original tale. I can’t comment on the comparison between the original and this retelling, but I was very pleased with Jessie Harrell’s modern take on it.

After refusing Aphrodite’s request to marry her very rude son, Psyche has been given a prophecy that sounds especially grim: She is apparently destined to marry a monster. Unbeknownst to her, Eros, who has accidentally nicked himself with one of his arrows and is now head over heals in love with her, is the one who arranged this so-called prophecy. He must then hide his identity and try to win her love.

Psyche is a truly sweet character that I completely adored. She is fun, stubborn and amazingly beautiful inside and out. Her life has taken quite a turn and I thought her reactions were up to par with my expectations. She wasn’t pathetic or extreme about it, she was strong, very mature and most important of all – real! I found her personality very refreshing. As for Eros, misunderstood and caring, he makes an easily likeable character and love interest. I felt his love and admiration for Psyche. I was rooting for him the whole way through. However, I found there was not a great amount of chemistry between the two until towards the end. Now for the other characters, as there are plenty: some of them that we came upon, I didn’t really care for, like Iris, Helios and Hestia. They seemed a bit unnecessary to the story except for adding more Greek mythology into it. However I did enjoy seeing Persephone and Charon. They held a more important role and their personalities were a fun addition.

With that said, there is quite a lot of Greek mythology mentioned in Destined. It’s not to say that if you’re not familiar with it you won’t enjoy it, but you may not understand or appreciate it as much as someone who knows the names and bios- at least a little. It gives the story much more charm if you know, for example, when Poseidon is mentioned, that he is the god of the sea. Some of it is specified in the novel, but not always, and never in great detail. Since I was familiar with most of it, though, I really loved getting reacquainted with the gods and goddesses in Jessie’s take.

Beautiful and heartbreaking, Jessie Harrell’s Destined is a delightful retelling that is full of crazy events and fun personalities. Even though I deduced them from the beginning, the twists and turns makes for an entertaining adventure. I would particularly recommend it to all Greek mythology fans. I look forward to reading more of Jessie’s novels.