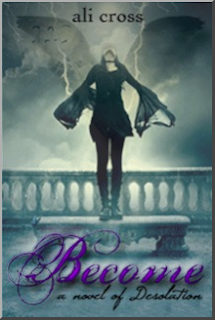 
Become is not your average YA paranormal. We’re thrown into an intense novel about the battle between angels and demons. Lucifer’s daughter, Desolation, is our protagonist and against her wishes, she’s being sent back to earth where there are teenagers and people with… feelings.

Desolation has a really unique personality. Being the devil’s daughter she’s very cautious, socially awkward and a bit of a loner. She doesn’t want to fall in her father’s footsteps. In fact, she doesn’t really like him all that much. She also senses that there’s something very different about her; As though she doesn’t belong in Hell. I had a lot of fun with Desolation. She is very critical of herself, but you can tell that underneath it all she’s a great person who is just trying to figure out where she fits in.

I really enjoyed the style of writing throughout the novel. It’s very descriptive and sophisticated; I found it highly intense, and with a lot more depth than most. There are strong messages sent throughout the story about finding oneself and, most importantly, good vs evil. The intensity was a bit of a problem when it came to the theology and the myths behind the angel/demon battles. I found myself getting confused during the explanations. My only knowledge of it comes from the show Supernatural, so the elaborate lore were a bit overwhelming. I had to reread a lot of passages to get the gist. For this reason, I couldn’t entirely get caught up in the story as much as I had hoped.

Despite the complexity, I still enjoyed the plot. Like I mentioned, it was very intense with a lot of action and battle sequences. I did like getting to know why Desolation was seemingly different from the others. The romance also played a big part in the story which did alleviate the seriousness throughout the book.

As an angel/demon book, don’t expect this to be like the YA novels Hush Hush or Fallen. Become goes right to the core of Norse mythology: Asgard, Loki (Lucifer), Odin, Thor. But even if, like me, you don’t know a lot about these myths, it’s still a fun read, however I think people versed in it would absolutely enjoy it to it’s full potential.

Giveaway
Ali has generously offered up a paperback copy of Become as well as some swag to one of my readers. 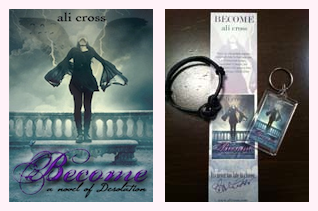 Giveaway details:
Open to US/Can residents
Ends November 15th, 2011
Use the Rafflecopter below to enter.