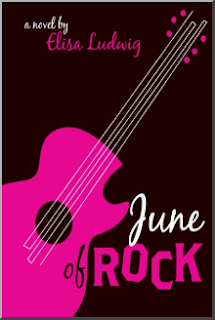 Fresh out of 10th grade and freshly dumped by her dreamboat music nerd boyfriend Micah, June Dixon is headed to Camp Decibelle for the summer. The girls-only rock camp sounds like the perfect destination for a budding drummer with a respectfully punk attitude — except for the “girls-only” part. Once at Decibelle, June is thrown in among her fellow campers, a hodgepodge of indie wannabes, aggro-folkheads and metal sleazoids. All of them are aiming for superstardom, starting with the camp’s Battle of the Axes competition. Learning to keep a beat and start a band is tough enough but June must also contend with the dueling egos (and rhythms) of her bossy bandmate Jess, Jess’s disgruntled best friend from home M3, and a bitchy drummer whose rumored uncle is June’s hero, legendary songwriter Lee Rooney. And then there’s the puzzling case of Brice Mills, the famous-in-his-own-right counselor who’s supposed to be coaching June’s band but seems to have taken an unusual interest in June herself. Sassy, fun and packed full of pop culture references, June of Rock is a love letter to both girl power and the power of music.

*A copy was provided by Elisa Ludwig for review purposes*

This was such a fun book! I went into it knowing it was going to be a short, quick read, and I completely enjoyed it. June of Rock gives us the story of a teenage girl – June – who’s on summer break from 10th grade and heading off to camp rock. June is a drummer with big dreams and a tad socially awkward. She doesn’t make friends easily and her punk attitude has made her a bit of an outcast.

Right from the start I was completely immersed in June’s narration. On top of her fabulous sense of humour, her dreams of being a rock star make her come up with incredible scenarios that are just so amusing. It’s easy to fall in love with this girl! Even though she can be completely awkward, she’s got a huge heart and a good head on her shoulders. She makes some bad decisions, but she learns from them! The supporting characters were equally well-written. Being at camp, there’s a strong diversity in personalities and that really gives life to the story. We’ve got charisma, angst, enthusiasm – but most of all, a feeling of liveliness throughout the novel.

I’m not a complete music nut. I’m pretty average in my knowledge of it; I love music, but I don’t play any instruments. So I was a bit worried about how I would get along with this plot. But that was not even an issue. I was absorbed in the music along with June and now I kind of wish I could play something! I want to go to Camp Rock!

June of Rock is a quick read that is definitely a good time. With an abundance of humour, I recommend this for anyone who need a mood lifter. I now look forward even moreso to Elisa’s upcoming novel, Pretty Crooked.

28 Responses to “Review: June of Rock by Elisa Ludwig”