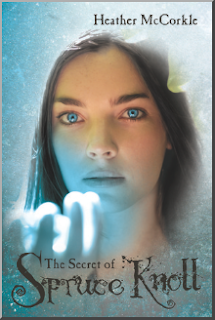 The Secret of Spruce Knoll

It’s hard enough being a teenager under normal circumstances; imagine being orphaned, sent to live with an unfamiliar aunt-and learning that there really is magic in the world. Following the tragic death of her parents, Eren Donovan moves to Spruce Knoll to live with her aunt. Little does Eren know the entire town of Spruce Knoll is filled with so-called “channelers”-a magical group of people who immigrated to the small Colorado town when they were driven out of their own lands.

Channelers are tied to the fate of the world. As the world slowly dies, so do they-and they alone have the power to stop the destruction of Earth. Now, Eren learns she not only lives among them, but she is one. When she meets local boy Aiden, his charming tricks show her being a channeler isn’t all bad; in fact, it’s kind of cool. But is it Aiden’s abilities or Aiden’s looks that Eren finds so fascinating?

As Eren and Aiden’s relationship blooms, so too does a mystery in Spruce Knoll. The town holds many secrets-and many enemies. It soon becomes apparent that the untimely death of Eren’s parents was no accident and that her life might be in danger, too. Only time will tell if young, inexperienced Eren has the power to protect the people she has come to love.

*A copy was provided by Heather McCorkle for review purposes*
When I read this synopsis for this novel that talks of “channelers” and their fates being tied to the world, I wasn’t really sure what to expect, and if I would really get it. I can now say that The Secret of Spruce Knoll is a wonderfully written paranormal novel that is completely original and full of wonder, love and loss.

Shortly after opening it’s pages, I was introduced to the town of Spruce Knoll – Erin’s new hometown – where people are acting peculiar and not very accepting. Some of them are even blatantly rude. Eren doesn’t know the reason behind this behavior, but once she finds out about her being a channeller, she soon uncovers why she will never really fit in with these people. Eren is a wonderful example of what it takes to overcome tough obstacles in life. The death of her parents, living in a new town where no one accepts her, and top that off with finding out about these strange powers – that can’t be easy! But Eren goes through it with her head held high and she really made me love her completely. I admired how she dealt with it all, and how strong she was through it.

We also have Aiden who is a charmer like no other. But with no negative intentions; he’s all sweets and good looks. I really enjoyed the way the romance in this book was formulated. Some reviewers have mentioned insta-love, but honestly I didn’t find it so, especially that months can go by within a few chapters. The pace it evolves in feels steady, natural and is full of passion. It’s not all easy, however. They go through a lot of distress that keeps us on our toes. Along with Aiden and Eren there is an abundance of secondary characters that all have a significance in the story and are all likeable – even the villains are fun to hate.

Heather doesn’t go easy on the plot either. She has written a story with a ton of excitement and plenty of twists. The pacing is perfect with action spread throughout, along with great characterization and world building. I do have a small wonder of why Eren’s true intentions towards the bad guys weren’t being felt by them – since they’re supposed to be able to feel emotions. I also wish we would have seen more of their powers in play; although there were still a few good spurts of it here and there. All in all, The Secret of Spruce Knoll is a wonderful debut that is incredibly original and deeply entertaining. Don’t hesitate to pick this one up!

28 Responses to “Review: The Secret of Spruce Knoll by Heather McCorkle”