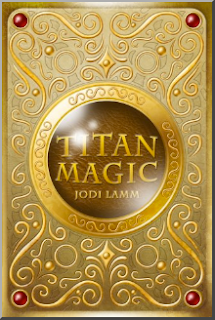 Mute, heartless, and tormented by auditory hallucinations, Madeleine Lavoie never questions why her family has hidden her from the world. But the night her brother casts her out, she learns the mysterious voice she thought existed only in her mind is no delusion, and no matter how hard she tries, she can never disobey it.

Now Madeleine must find her own voice in a cacophony of powerful tyrants, monsters, and gods. If she fails, she will forfeit her life and the lives of everyone who loves her. But if she succeeds, she may finally gain the ability to love someone in return.

*A copy was provided by Jodi Lamm for review purposes*

Titans, monsters and gods aren’t part of my usual reads, but when I read this synopsis about a mute girl with hallucinations and lots of secrets, my uncertainty turned to intrigued and in the end I found it to be an entertaining story.

The mysteries start immediately in Titan Magic. We meet Maddy (Madeleine), mute and hearing voices. Actually only one voice – a voice whose command she can’t seem to refuse. Which is why her mother and brother tie her to the bed so she’s not able to do as he wishes and go find him -however badly she wants to. I was curious right away about Maddy’s strange predicament; why is she mute? Who’s talking to her and why is he calling on her? Before long, her brother throws her out of the house and she runs into the forest where she starts to learn who she really is. So the mysteries are plentiful, but they aren’t all drawn out. We get some answers right at the beginning, more towards the middle, and it ends with everything disclosed.

The world in Titan Magic holds quite a few characters. Maddy, the protagonist, goes on a big journey of self-discovery and what she finds changes her whole life – her whole self-image – and not for the better. She soon learns to deal with this and makes the best of what is given to her, which I really admired. I did enjoy her story, although I did have difficulty relating to her. A lot of her findings were strange to me as I had not stumbled upon the myths before. (It’s based on a certain folklore that I had only heard about in passing.) I can’t say it wasn’t interesting, just very hard to grasp, therefore slightly hindering my enjoyment of the story. Along with Maddy, there are a lot of personalities that we stumble upon. All of them play an important role in the story and each one have their own unique charm that really brings them to life; Marcus with his inner demons, Will and his honest-to-goodness heart. The characters are easily the best part of the novel!

Jodi Lamm’s Titan Magic gives us a fun filled fantasy that I’d recommend to those who like their books filled with magic, romance and discovery.