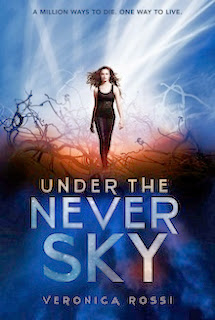 Aria is a teenager in the enclosed city of Reverie. Like all Dwellers, she spends her time with friends in virtual environments, called Realms, accessed through an eyepiece called a Smarteye. Aria enjoys the Realms and the easy life in Reverie. When she is forced out of the pod for a crime she did not commit, she believes her death is imminent. The outside world is known as The Death Shop, with danger in every direction.

As an Outsider, Perry has always known hunger, vicious predators, and violent energy storms from the swirling electrified atmosphere called the Aether. A bit of an outcast even among his hunting tribe, Perry withstands these daily tests with his exceptional abilities, as he is gifted with powerful senses that enable him to scent danger, food and even human emotions.

They come together reluctantly, for Aria must depend on Perry, whom she considers abarbarian, to help her get back to Reverie, while Perry needs Aria to help unravel the mystery of his beloved nephew’s abduction by the Dwellers. Together they embark on a journey challenged as much by their prejudices as by encounters with cannibals and wolves. But to their surprise, Aria and Perry forge an unlikely love – one that will forever change the fate of all who live UNDER THE NEVER SKY

*A copy was provided by HarperCollins for review purposes*

After reading the synopsis did your expression resemble this: o_O ? Because that was mine! So let me help. In a dystopian future, everyone lives “virtual lives” through an eyepiece. They go where they want and do what they wish – all virtually. It’s actually pretty neat. Aria, however, gets expelled from this life and is forced to the outside world – the real world. Aria who has known nothing but a disease free virtual life where you can’t be harmed, is now alone in a real forest full of dangers and death traps. She is not alone for long though. She soon meets Perry who has lived with his tribe in the real word his whole life. His nephew has been taken by Aria’s people and he’s left his tribe to try to find him – which is when he stumbles upon Aria and they team up. This is the gist of it!

As we’re thrown into the story without any sense of what kind of world this is, it’s pretty confusing and a tad hard to follow. On top of the excessive use of pronouns, there are a lot of terminologies and semantics that are thrown in for us to figure out. I had a bit of a hard time with this at first. It does take a good one third of the book to start making sense of it all. After that it gets more interesting and less imposing, but it still makes it hard to really get into the story because while the introductions were happening, I was pondering what I had just read. There is also a lack of explanation towards their present world and why it’s evolved to where they are. Furthermore, why are there Outsiders? Why can’t they join the pod of the virtual realms? It made it difficult to understand who the villains were and who/what we should be afraid of in this world.

Now onto the positives: I did find myself quite surprised with the addition of some paranormal elements within the story, which is seldom seen in dystopian novels. In this book’s future, there are Aether storms that manifests from fire and water coming together in the sky and “shoots” down on earth (fun, huh!?). The appearance of the Aethers also brought some new genetic modifications that give heightened senses to some humans. Some can hear from miles away while others can feel emotions, for example. I found it really original and it added an extra fresh twist to the dystopian genre.

The POV in Under the Never Sky alternates between Aria’s and Perry’s so we get acquainted with both of them, which I really enjoyed. We’ve got Aria, strong-willed and perceptive, then Perry who’s stubborn and reserved. They make quite the interesting pair. I found Aria’s character very well written. You see her grow and evolve from this apprehensive girl oblivious to the new world she’s thrown in, to a strong and resourceful young woman that could take on anything. I really admired her.

Even though it didn’t blow my mind, I still enjoyed it and will certainly continue with the series. I’m curious where the story is going to take us from here and going by my assumptions, there’s a pretty good chance that I will like book two much more.

23 Responses to “Review: Under the Never Sky by Veronica Rossi”