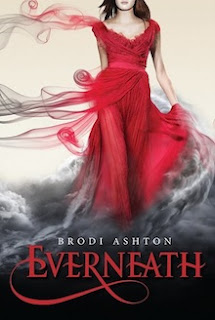 Last spring, Nikki Beckett vanished, sucked into an underworld known as the Everneath, where immortals Feed on the emotions of despairing humans. Now she’s returned- to her old life, her family, her friends- before being banished back to the underworld… this time forever.

She has six months before the Everneath comes to claim her, six months for good-byes she can’t find the words for, six months to find redemption, if it exists.

Nikki longs to spend these months reconnecting with her boyfriend, Jack, the one person she loves more than anything. But there’s a problem: Cole, the smoldering immortal who first enticed her to the Everneath, has followed Nikki to the mortal world. And he’ll do whatever it takes to bring her back- this time as his queen.

As Nikki’s time grows short and her relationships begin slipping from her grasp, she’s forced to make the hardest decision of her life: find a way to cheat fate and remain on the Surface with Jack or return to the Everneath and become Cole’s…

*A copy was provided by HarperCollins for review purposes*
Hades and Persephone, we’ve all heard the story. Of all the myths, this is easily my favorite. When I saw that Everneath was a retelling of this heartbreaking tale, I was instantly attracted to it. However, I was mistaken. This is not a Persephone and Hades retelling per se, but a modernized, completely original story that is loosely based on the myths of Persephone and Eurydice. It was beautiful!

First and foremost, the character that breathes powerfully throughout this book, is the emotion. It is full of raw, pure, palpable emotions. I could constantly sense Nikki’s despair. Even when stripped of all feeling, she has a hollowness that I could easily discern; a void once full of energy. She lost everything to the Everneath, and six months is an incredibly short time when you know what you’re going back to. My heart was breaking for her, while holding on to a tiny flicker of hope that things would turn around.

You can’t start describing Nikki without first understanding Cole. Cole is manipulative and cunning, which is capitalized by the fact that he can control emotions. He wants Nikki; Nikki loves Jack. So while her actions can seem a bit rash, even impulsive, Cole plays a big role behind these decisions. Her doubts, her pain, her fears, they’re all fabricated, or at the very least, magnified by Cole. With this in play, I couldn’t help but open my heart up to her. She becomes his puppet, and it’s tragic. Cole and Jack are complete opposites which makes a fantastic love triangle. One you will love, and one you will love to hate.

To add to the trepidation, the story shifts from past to present in a way that leaves you feeling restless. You KNOW what’s going to happen while seeing these events unfold. It keeps the story intriguing, while building anticipation for a shattering ending. Was it predictable? Yes. But was it original? Completely. This fresh take on the Persephone myth mixes the old with the new for an altogether beautiful and dark tale.