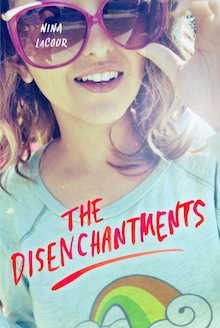 Colby and Bev have a long-standing pact: graduate, hit the road with Bev’s band, and then spend the year wandering around Europe. But moments after the tour kicks off, Bev makes a shocking announcement: she’s abandoning their plans—and Colby—to start college in the fall.

But the show must go on and The Disenchantments weave through the Pacific Northwest, playing in small towns and dingy venues, while roadie-Colby struggles to deal with Bev’s already-growing distance and the most important question of all: what’s next?

Morris Award–finalist Nina LaCour draws together the beauty and influences of music and art to brilliantly capture a group of friends on the brink of the rest of their lives.

*A copy was provided by Penguin Group (Canada) for review purposes*

This cover screams Fun in the Sun! This blurb screams Road Trip and Music! So I was going into this expecting a light, fun, read. It’s nothing like that. It has it’s fun moments for sure, but the story is very sad bordering on depressing with a deep “finding oneself” message. This is not a bad thing at all. In fact I often enjoy books with this vibe, but going into this with opposite expectations really threw me for a loop.

The story is told in Colby’s point-of-view. He and his best friend Bev have been planning a year long trip around Europe for years. Leaving on a road trip to tour with Bev’s girl band, she tells him the Europe trip is off. Colby spends the bigger part of the book brooding over this, upset towards Bev for lying to him for months. I understood where he was coming from, but I didn’t get why he was depressed about it to such degree. Losing a year he could have spent at college is definitely not fun – especially when it’s unplanned, it’s hardly the end of the world. Plenty of high school graduates take a year off before going to college and end up with great careers. For Colby, it was as if he was losing his whole future.

It’s not all sad however. We do have some fun parts where the girls play their very bad music, meet some intriguing people who take them on mini adventures along the way. These can seem a bit far fetched, but are still entertaining. The girls are all so unique with their quirks and fun spirits. The whole cast is really great which helps brighten the mood of the book. The only character I did not like very much was Bev. She’s very moody and secretive for the most part, refusing to explain why she suddenly backed out of the trip. She gives off a lot of angst which I never particularly enjoy. Colby though, he’s a great protagonist. His voice is real; he may be dramatic but his feelings still feel true. So overall, even though I wasn’t expecting such a serious vibe with forlorn emotions, the characters absolutely saved the day and I was still able to have fun with the story. I’m fairly certain, especially now that you know what to expect, most readers will enjoy this more than I did.

24 Responses to “Review: The Disenchantments by Nina LaCour”