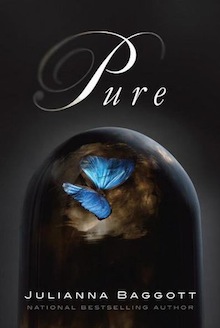 We know you are here, our brothers and sisters . . .
Pressia barely remembers the Detonations or much about life during the Before. In her sleeping cabinet behind the rubble of an old barbershop where she lives with her grandfather, she thinks about what is lost-how the world went from amusement parks, movie theaters, birthday parties, fathers and mothers . . . to ash and dust, scars, permanent burns, and fused, damaged bodies. And now, at an age when everyone is required to turn themselves over to the militia to either be trained as a soldier or, if they are too damaged and weak, to be used as live targets, Pressia can no longer pretend to be small. Pressia is on the run.

Burn a Pure and Breathe the Ash . . .
There are those who escaped the apocalypse unmarked. Pures. They are tucked safely inside the Dome that protects their healthy, superior bodies. Yet Partridge, whose father is one of the most influential men in the Dome, feels isolated and lonely. Different. He thinks about loss-maybe just because his family is broken; his father is emotionally distant; his brother killed himself; and his mother never made it inside their shelter. Or maybe it’s his claustrophobia: his feeling that this Dome has become a swaddling of intensely rigid order. So when a slipped phrase suggests his mother might still be alive, Partridge risks his life to leave the Dome to find her.

When Pressia meets Partridge, their worlds shatter all over again.

*A copy was provided by Grand Central Publishing for review purposes*

A doll-face for a hand! Babies protruding from necks! Do I have your attention yet? Ok, this book is harsh! The world is one of THE most disturbing dystopian world I’ve ever read. It’s cruel, it’s very bizarre, and it’s strangely fascinating. Some things are definitely hard to swallow, but a merciless world such as this – that is built with excellence, might I add- makes for a spine-chilling read that you will not soon forget!

Pressia lives in the aftermath of an atomic bomb that almost destroyed the planet. However, when this bomb erupted, it fused people with objects, earth or other beings. A doll-face for a hand as her biggest fusion, Pressia came out pretty lucky. I enjoyed Pressia as our protagonist. She’s brave and has a good sense of loyalty – to her friends, to her kind, to humanity. She’s not the only character we get to know as there are multiple perspectives visited during the story. Pressia and Partridge are the most common. Partridge, a character from the Dome where humans survived the bomb unscathed, escapes it to try to find his mother. He has never seen anything other than civility, or even normality, in the dome, so getting to see him take in this brutal world is terribly interesting. In addition to these two, we’ve got a few less visited POVs from characters that we meet throughout the book; some good, some evil, for an overall eccentric mix.

With the world building that is clearly well researched as well as grotesquely imaginative, the multiple perspectives help even more in showing us this world thoroughly. We see enough point-of-views to know what’s happening in every corner; we get the big picture! The novel can seem overly descriptive at times, the pace can also drag a bit in the middle, but I can’t say I was ever bored. If you’re a fan of darker dystopians, Pure is one that will stick with you, make you think, and appreciate what we have!