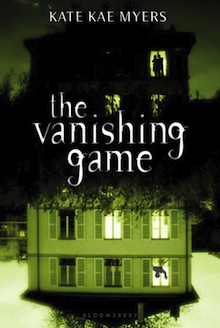 Seventeen-year-old Jocelyn follows clues apparently from her dead twin, Jack, in and around Seale House, the terrifying foster home where they once lived. With help from childhood friend Noah she begins to uncover the truth about Jack’s death and the company that employed him and Noah.

Jocelyn’s twin brother Jack was the only family she had growing up in a world of foster homes-and now he’s dead, and she has nothing. Then she gets a cryptic letter from “Jason December”-the code name her brother used to use when they were children at Seale House, a terrifying foster home that they believed had dark powers. Only one other person knows about Jason December: Noah, Jocelyn’s childhood crush and their only real friend among the troubled children at Seale House.

But when Jocelyn returns to Seale House and the city where she last saw Noah, she gets more than she bargained for. Turns out the house’s powers weren’t just a figment of a childish imagination. And someone is following Jocelyn. Is Jack still alive? And if he is, what kind of trouble is he in? The answer is revealed in a shocking twist that turns this story on its head and will send readers straight back to page 1 to read the book in a whole new light.

*A copy was provided by Bloomsbury Children’s Books for review purposes*
Mystery, suspense, romance, heartbreak, all rolled into one little novel. This was quite the mind-boggling read. If you enjoyed Dan Brown’s Da Vinci Code, I was often reminded of it when reading The Vanishing Game. We’re taken on an intense, fast paced scavenger hunt where Jocey has to solve clues her brother left for her after his supposed death. These riddles are really clever and I had lots of fun figuring out what they lead to.

What stands out the most in this novel, is how baffling it all is. After the first 25% of it, I was severely creeped out with my eyes bulging out of my head, my mind screaming WHAT IS HAPPENING? until I finally needed a break and set it aside. From the beginning, we’re thrown right into this mystery full of puzzle after puzzle that keeps blowing a tiny bit of your mind each chapter you read. You think you have it figured out, but then you turn the page. It’s fast moving and highly suspenseful.

The writing is pretty simple and to the point. Nothing to write home about, but the story is so engrossing that you don’t really notice it very much. I found the romance a bit out of place, though. It feels forced at times, and obvious for the most part. It’s almost necessary to have it included, in a sense, because we’re made to expect it, but it doesn’t really give any extra charm to the story; there are no real sparks between the two. Although, I think this may be due to the fact that the book is so dark and disturbing, their apparent crush on each other is never in the forefront of our thoughts. I still really enjoyed both characters. They make a great team and you never know what’s going to happen next to either of them. A third character, and the one that is constantly kept at the heart of the story, is the Seale house. This exceedingly eerie house seems to have a mind of its own with freaky happenings no one’s been able to explain. It gives out this unnatural vibe that I would never want to step foot into. I definitely got the creeps every time the scene involved this abandoned foster home. My heart would pound until they finally left, but it was always exciting.

The ending is certainly heartbreaking, and positively mind blowing. I would have never figured this out no matter how hard I tried. However I’m still not sure I’m 100% satisfied with it. I loved that it took me by surprise which rarely happens. I relished in how well thought out it was; It’s one of those endings that will make you want to reread the whole thing again in a new light. But there are still some things that were quickly explained of which I craved for a better understanding.

Overall this is probably one of the best YA mystery/thriller I’ve happened upon. It easily kept me absorbed in the story, not knowing what would happen from one sentence to the next. If you’re looking for a good YA mystery/thriller, this has become the first one that I would recommend.

36 Responses to “Review: The Vanishing Game by Kate Kae Myers”