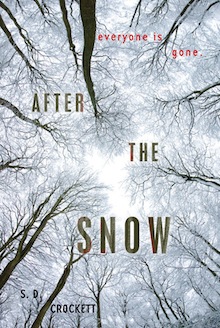 Fifteen-year-old Willo was out hunting when the trucks came and took his family away. Left alone in the snow, Willo becomes determined to find and rescue his family, and he knows just who to talk with to learn where they are. He plans to head across the mountains and make Farmer Geraint tell him where his family has gone.

But on the way across the mountain, he finds Mary, a refugee from the city, whose father is lost and who is starving to death. The smart thing to do would be to leave her alone — he doesn’t have enough supplies for two or the time to take care of a girl — but Willo just can’t do it. However, with the world trapped in an ice age, the odds of them surviving on their own are not good. And even if he does manage to keep Mary safe, what about finding his family?

*A copy was provided by Raincoast Books for review purposes*
I started After The Snow with high hopes. Post-apocalyptic books often become favorites or mine, thus I was looking forward to a story happening after Global Warming turns our planet into Snowmageddon. Unfortunately, it took me completely off guard with the bizarre writing style, then failed to captivate me with its unusual and slow-moving plot.

Writing in slang/dialect can be done well, look at Blood Red Road for example, which I loved. However, it’s a risk to take that will not always be taken well by all readers- which was the case for me and After The Snow. To give you an example:

“The dog gonna tell me what to do. The dog gonna help me. The house look proper empty, don’t it, dog?” –quote in ARC of After the Snow

I could not, for the life of me, imagine a 15 year old boy when I was reading this; I kept thinking of him as 5 or 6 which made it extremely hard for me to relate to him or get drawn by his narration. It also caused details about the world building to slip through my fingers, leaving me feeling misled.

I do prefer a high-action plot, but slower paces can also end up thoroughly fascinating. At first it had a lot of potential to become a truly enthralling story, regrettably I never understood where the story was leading up to, which, in the end, left me highly disappointed. The characters’ intentions are never made clear, so I was constantly confused as to what the story actually was about. I was also thrown off by strange events and behaviors throughout the novel, like cannibalism, talking to a dog skull, wearing this dog skull, the dog talking back – really this dog disturbed me to no end. For these reasons and lack of explanations, the plot simply was not one I could easily swallow, nor understand.

The setting is the one part I actually enjoyed. The never-ending snow, the mountains and even the disturbing caves; it’s all very well described with a lot of detailed scenery. This is what kept me going in the hopes that it would eventually tie off into a great, mysterious story.

I truly wanted to like this one, I do not enjoy writing negative reviews, at all, but sadly it has to be done. I can’t exactly recommend this one to many, although you can always give it a try as it seems to be a book that would enchant a select few who get a kick out of unorthodox stories with peculiar writing styles.

21 Responses to “Review: After the Snow by S.D. Crockett”