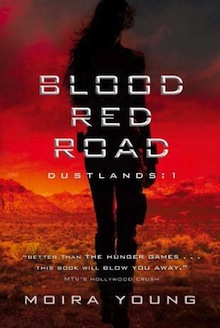 Saba has spent her whole life in Silverlake, a dried-up wasteland ravaged by constant sandstorms. The Wrecker civilization has long been destroyed, leaving only landfills for Saba and her family to scavenge from. That’s fine by her, as long as her beloved twin brother Lugh is around. But when a monster sandstorm arrives, along with four cloaked horsemen, Saba’s world is shattered. Lugh is captured, and Saba embarks on an epic quest to get him back.

Suddenly thrown into the lawless, ugly reality of the world outside of desolate Silverlake, Saba is lost without Lugh to guide her. So perhaps the most surprising thing of all is what Saba learns about herself: she’s a fierce fighter, an unbeatable survivor, and a cunning opponent. And she has the power to take down a corrupt society from the inside. Teamed up with a handsome daredevil named Jack and a gang of girl revolutionaries called the Free Hawks, Saba stages a showdown that will change the course of her own civilization.

*A copy was provided by Random House Canada for review purposes*
After seeing all the wonderful reviews of this book, I was excited to see it appear at my doorstep, and I didn’t wait long to dive into it. A violent futuristic world, fast pace action, with a kick-butt heroine? Count me in! It delivers what it promises, as I instantly became absorbed in Saba’s journey to save her brother.
“Once, we could count on pullin a fish from the lake an a beast from our traps. Fer everything else, we planted some, foraged some, an all in all, we made out okay. But fer the last year, whatever we do, however hard we try, it jest ain’t enough, Not without rain. We bin watchin the land die, bit by bit.”

As you can see from the above quote, the first thing anyone will notice going into this will be the writing style. If you look at the reviews, some love it, and others hate it. Luckily, I am on the loving it side, though it helped that I knew what to expect going in. I read a short excerpt beforehand, and in turn, I had absolutely no problems getting into the story right away. I also could not imagine the book without it. It has character! It makes it so unique, so filled with personality that you can’t help but feel like Saba is sitting in front of you, recounting her journey. I’m telling you, I could hear her. It’s a brilliant way to give life to a story.

Saba is off to find her brother who’s been kidnapped, which also left her in charge of her pesky little sister. At first, Saba seemed like she was going to be a whiny, exasperating protagonist. She was awful to her sister, and a bit too reliant on her brother. However, as the story progresses, we get to see Saba grow and change into this strong-willed, feisty person overflowing with bravery. She never ceases to be extremely stubborn, even a bit too much at times where I wanted to scream at her for it. But for the most part, I loved her fearless personality and determination.

The world: So ugly, but so beautiful. The moving sand dunes, the everlasting nothingness, the red dust; everything is so impressive, yet intimidating. I constantly felt a sense of longing for the world that was. Even though Saba has never seen anything but, you can feel the loneliness everywhere. There are also hints of fantasy and magic elements throughout the novel that make it even more impressive, not to mention unnerving.

The book is not without a few flaws: Some turnabouts at the end felt a bit too Hollywood-like; The world itself left me with a few questions- some of the details are a bit fuzzy at the edges; Then the stars- all this intriguing astrology in the beginning that gets abandoned by mid-book. Though these are all pretty minor overall, and since this is the first in its series, it felt to me like we were sent off into a strong, fast pace story that concentrates on action and excitement at first, but will (hopefully) give us a more refined world building in the following installments.

Incredibly gripping and grossly entertaining, Blood Red Road sends us on a journey full of bumps and scrapes that will leave your heart pounding with energy. I highly recommend it to every fan of The Hunger Games. Oh, and there’s cage fighting! Enough said!