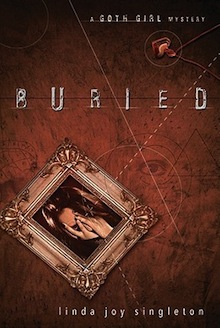 In a new school and determined to keep her secrets from being discovered, Thorn finds a mysterious locket that leads to a shocking discovery. Surrounded by new friends she barely knows, as well as the school’s famous former student, a smoking-hot musician named Phillipe, Thorn must investigate to find out if one of them is a murderer.

*A copy was provided by Flux Books for review purposes*

Thorn’s Finder ability pretty much says it all- she finds things. When one day, it leads her to an ugly necklace, she’s soon thrown into a murder investigation. Buried is a light read with an enticing premise that, unfortunately, fell flat with unoriginality and lack of exciting twists.

Thorn’s character is a goth, she wears black, spikes, piercings, and has an attitude to match. I actually really liked her even though she isn’t terribly developed. She has an outgoing personality that makes this book a bit more interesting. However, I was disappointed that her Finder ability, which had a lot of potential, was never elaborated. We’re simply told what it’s called, and that is that.

The plot is what I had the most problems getting into. It starts with an intriguing murder mystery which has Thorn set to solve, but the abundance of unrelated subplots turns it into a mediocre story that simply lost its flair. The talent show, the town’s vigilante, the visiting superstar, the judgmental father – it’s simply too much in such a small book that it leaves the murder in the background until the latter gets accidentally solved without any real detective work. Don’t get me wrong, each of these storylines are genuinely interesting, which is why I wish they had had a chance to flourish.

In a mystery, the twists are important; in a murder mystery, suspense is the key to make it memorable. Sadly, Buried lacks in both of these. The twists are easy to decipher, and I was never left with a feeling of excitement. Some of the developments I would even consider dull. Overall it’s not an awful book as its a fairly quick read with a fun protagonist, but it could have been much better if the main plot had kept its priority where we could have gotten a more complex story.