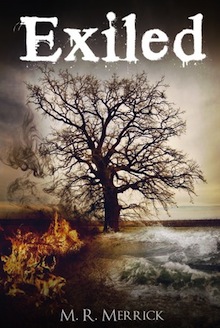 Chase Williams is a demon hunter in the Circle, or at least he was supposed to be. On his fifteenth birthday, Chase stepped up to the altar to claim his elemental power, but it never came. Elemental magic is passed down to a hunter through the bloodline, but on Chase’s birthday, the bloodline stopped.

Exiled without the Circle’s protection, Chase has spent two years trying to survive a world riddled with half-demons and magic. When he has a run in with a frightened and seemingly innocent demon, he learns the Circle’s agenda has changed: the Circle plans to unlock a portal and unleash pure-blood demons into the world. Vowing to stop them, and knowing he can’t do it alone, Chase forms a reluctant alliance with Rayna — a sexy witch with an attitude and a secret.

In their attempt to stop them, Chase and Rayna find themselves in the middle of the Circle’s plan, leaving one of them to decide what their friendship is worth, and the other’s life depending on it.

*A copy was provided by M.R. Merrick for review purposes*

M.R. Merrick takes YA paranormal to a whole new level with his debut novel, Exiled, where we’re taken on an enthralling action adventure filled with creatures from demons to trolls, alongside our strong, determined protagonist – Chase.

A heartbreaking and powerful start; we’re immediately introduced to our dear Chase, when we’re taken to his childhood, seeing him exiled from the Circle for having no elemental magic. Fast forward a few years, we meet a teenager who has matured beyond his years by having to keep himself and his mother alive, while constantly on the lookout for demons – killing them when necessary. We do see that he still has some boyish innocence however, when he meets the sexy, smart, and witty Rayna. Both of them are enticing, easily likeable characters, but together, they’re infinitely entertaining. The amusing banter between them enlivens the story, giving us a great balance of lightheartedness inside this dark tale.

These are not the only people we get to know and love in this novel. It holds a fantastic cast of secondary characters that are just as enchanting, along with villains that are ruthless. From the unfortunate trolls we meet along the way, to Willy – the always delightful demon – we’ve got vivid personalities that clearly sets them apart, giving them important supporting roles that adds quite a bit more charm to the story.

It’s hard to pinpoint which genre I would consider this; Urban Fantasy would be my pick: It’s a fast paced adventure with plenty of fantasy and paranormal elements, a touch of romance, and non stop action. Surprisingly, it all fits incredibly well. I’m not a big fan of fantasy especially – they mostly overwhelm me with the endless hierarchies and politic, so I was relieved this was not the case with Exiled. I was kept intrigued by the inner workings of the demons and hunters. Their conspiracies and prophecies had me engrossed; impressing me with twists I never expected. Its plot is overall immensely creative, giving us a story that is unique, with an ending that will leave you dying for more.

Even though I’m hesitant to get into fantasy, I’m glad that I finally caved to all the threats rave reviews and gave Exiled a try. Intense and high in action, you should find yourself easily immersed in M.R. Merrick’s imaginative world. It has a whole hell of a lot to offer for any and all reading preferences.