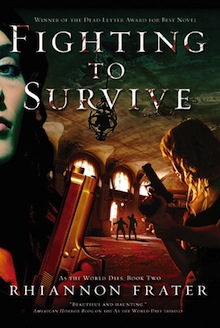 Picking up where The First Days ends, Fighting to Survive features the further zombie-killing, civilization-saving adventures of a pair of sexy, kick butt heroines and the men who love them. A hundred or so survivors of the zombie plague have found tenuous safety in the walled off center of a small Texas town. Now the hard work of survival begins—finding enough food; creating safe, weather-resistant shelter; establishing laws; and fighting off both the undead who want to eat them and the living bandits who want to rob and kill them.

Spoiler free even for those new to the series.
Zombies. They’re freaking scary aren’t they? They eat your flesh, they don’t feel pain, and they never EVER stop. But what about humans? Humans who are dead set on surviving? Humans who have a screwed up sense of humanity in this dying world? And these humans, they may not eat your face, or pound themselves on a wall for days on end to get a taste of you, but they have intelligence, they have strength… and they have weapons. Zombies are NOT the only enemy anymore! I’m not even sure which I fear the most.

Fighting to Survive continues the story of our exceptional heroines Katie and Jenni. They’re surviving at the fort, making a new life for themselves behind the safety of the walls. As in The First Days, Fighting to Survive gives us incredible character development. We get acquainted with a lot of the survivors; even if only briefly, these people could not be any more real. I know them, with all my heart I love them, and this makes everything especially terrifying. It’s a zombocalypse, people die, and it matters! Even when it’s the less important characters who we barely know – It matters! In this sequel we really get to see the day to day events of what it takes to survive and build a new community after disaster strikes. There are all kinds of people with different views, different opinions; It’s a whole planet in a nutshell. But don’t get too comfortable!

It’s not all peace and quiet – that’s not really Rhiannon’s style now, is it? (how boring would that be!) – zombies are aplenty, in addition, we still have a vigilante to find, as well as new bandits to deal with. Tension is, again, high from start to finish. Even during the peaceful times, the underlying mood is constantly ominous with an always present gut feeling that a storm is brewing. I LOVE it!

A mastermind in suspense, Rhiannon knows how to build excruciating anticipation where you just want to read until your eyes bleed. It’s such an extraordinary adrenaline rush I had to stop mid-ending to scream at her, let it out a little. The ending: foreboding, exciting, terrifying. Siege, the third and final book in this epic series, will undoubtedly be a thing of legend!

If you haven’t started this series yet, you have no idea what you’re missing. It’s the most amazing story about survival that I have ever read, with scenes so haunting, characters so vivid, that I will be hearing their words and remembering their fears for a very, very long time.

Curious on my thoughts on The First Days?
Click here for my 5-star review!

26 Responses to “Review: Fighting to Survive by Rhiannon Frater”