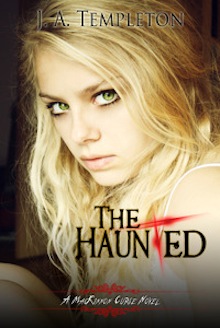 After battling a malevolent ghost that held the spirit of her friend Ian MacKinnon bound to the land for two hundred years, sixteen-year-old reluctant psychic, Riley Williams, felt as if she was finally easing into her new life in Scotland.

Or so she thought.

Laria, the spirit of the witch who had cursed Ian wants revenge for Riley’s interference and she’s bringing along friends—dark entities who thrive on evil.

The one bright spot in Riley’s world is Ian’s descendent, Kade MacKinnon, who could easily be Ian’s modern day twin. The parallels between the two guys are undeniable. As Riley’s relationship with Kade blossoms, she begins to realize Laria has grown in her power since their last confrontation—a power that could very well manipulate the living just as effectively as the dead.

*A copy was provided by JA Templeton for review purposes*
After the killer cliffhanger we were left with at the end of book 1, I was excited to get back into the creepy life of Riley Williams. Laria is back, or well, she never left, and she has friends now; friends who are just as evil as she is.

What I enjoyed the most from The Deepest Cut was how awfully creepy it was. In The Haunted we’ve still got plenty of evil ghosts and spine chilling moments, but we’ve also got quite a bit more character development and romance in the mix. I was particularly happy about the romantic undertone throughout the book. JA wrote a wonderfully bittersweet romance in book 1; she introduces an even better one in this sequel. First, she gives us Kade, a looker and a charmer, then she creates this passion between him and Riley that is irresistibly endearing. Though, of course, Laria has to get her horrible, menacing hands between them. She is awful! But definitely makes a fantastic nemesis.

We get to know a few new characters as well: Kade’s sister and cousin, in addition to a couple of new ghosts. The whole MacKinnon family history is fascinating. I’m very curious to learn more about their past; I’m fairly certain they have quite a few more skeletons in their closets than what we were initially told.

The MacKinnon Curse series encloses deeper, more serious topics than just hauntings – turning a simple scary ghost novel into a substantially bigger story. In addition to making the characters realistic, these real life problems mixed in with the paranormal work to bring out a wide array of emotions. Riley is learning how to deal with the cutting, and Laria had begun to really taunt her with it, not to mention her dad throwing unexpected news at her. This, with the addition of Laria possessing her friends and family, is turning Riley’s life into a complete mess. We see a lot more of these real-life developments than the first in the series, consequently making the paranormal plot more scarce, though I did enjoyed getting to know these people better. It makes us really care for whatever’s going to happen to them; whatever has already happened to them. I won’t just be reading the next book for some mindless scary entertainment, by now I’m fully invested in these characters lives. I want Riley to rid herself of this malevolent ghost before something grave happens to her, or anyone she loves. Laria has gotten a heck of a lot more serious, and extremely terrifying!

I wouldn’t consider the ending a cliffhanger. It’s obvious that the story is not over, but I didn’t gasp and curse JA for leaving us hanging again

(nicely of course >.< – because we all secretly love cliffhangers!). If you haven’t read this series yet and you’re a fan of hair-raising ghost stories, you are missing out! This is positively one of the creepiest I’ve come upon!
The MacKinnon Curse series so far:

Want to know what I thought of The Deepest Cut?
Click here for my review!

20 Responses to “Review: The Haunted by J.A. Templeton”