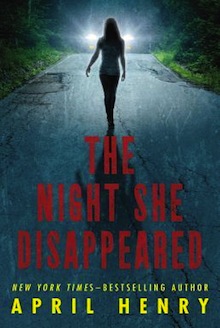 Gabie drives a Mini Cooper. She also works part time as a delivery girl at Pete’s Pizza. One night, Kayla—another delivery girl—goes missing. To her horror, Gabie learns that the supposed kidnapper had asked if the girl in the Mini Cooper was working that night. Gabie can’t move beyond the fact that Kayla’s fate was really meant for her, and she becomes obsessed with finding Kayla. She teams up with Drew, who also works at Pete’s. Together, they set out to prove that Kayla isn’t dead—and to find her before she is.

*A copy was provided by Raincoast Books for review purposes*
The Night She Disappeared, with only 240 pages, is a short but intense mystery. Kayla was only going out to deliver a pizza… but she never came back.

As some of you may know, mysteries, thrillers, horrors of all kinds are my favorite genre. I was enticed by this synopsis as soon as I read it, and I found myself absorbed in the story from the start. Told in multiple perspectives, we get to walk into the lives of the people directly affected by Kayla’s disappearance, all the while trying to figure out what exactly happened to her. We even get glimpses of the kidnapper’s point-of-view, which is especially disturbing. Mostly, though, we get to see what Kayla’s friends and co-workers are going through; guilt, blame, and terror all make an appearance. There’s also bonds that form between the characters which I found realistic to dire situations such as this. The psychological consequences are clearly not overlooked as April did a great job going into the minds of these teenagers, having it all feel real, while keeping an overall sinister vibe.

My favorite part of reading this novel was the way it was actually told. Its format includes paper clippings, evidence pieces, interviews, and other memorabilia. For lovers of detective work, this is a sure way to keep you glued into not only the characters lives, but the investigation as well. Along with its short chapters, it’s a novel that is especially easy to read in one sitting.

Not only do we see Kayla’s kidnapping as a real-life possibility, this book makes us aware of how grave, how incredibly serious this all is. We see faces on billboards, on TV, on milk cartons, but do we even notice anymore? Do we take the time to see if we recognize anyone? These millions of people who are missing, who have friends and families going through exactly the same thing these people are going through with Kayla, get lost in the statistics to never be seen again. Despite its size, this book sends out a big message. Take the time, SEE them!

A contemporary thriller that packs a punch, The Night She Disappeared is a novel that I think many readers will enjoy for its unique structure and spine chilling mystery. For such a short read – what have you got to lose?

28 Responses to “Review: The Night She Disappeared”