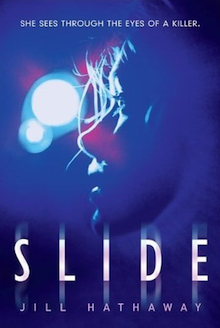 Vee Bell is certain of one irrefutable truth—her sister’s friend Sophie didn’t kill herself. She was murdered.

Vee knows this because she was there. Everyone believes Vee is narcoleptic, but she doesn’t actually fall asleep during these episodes: When she passes out, she slides into somebody else’s mind and experiences the world through that person’s eyes. She’s slid into her sister as she cheated on a math test, into a teacher sneaking a drink before class. She learned the worst about a supposed “friend” when she slid into her during a school dance. But nothing could have prepared Vee for what happens one October night when she slides into the mind of someone holding a bloody knife, standing over Sophie’s slashed body.

Vee desperately wishes she could share her secret, but who would believe her? It sounds so crazy that she can’t bring herself to tell her best friend, Rollins, let alone the police. Even if she could confide in Rollins, he has been acting off lately, more distant, especially now that she’s been spending more time with Zane.

Enmeshed in a terrifying web of secrets, lies, and danger and with no one to turn to, Vee must find a way to unmask the killer before he or she strikes again.

*A copy was provided by HarperCollins for review purposes*
Slide is a refreshing, fast paced YA mystery that has original paranormal elements along with great character building; a very quick read that I would recommend to all fans of thrillers.

Vee is able to “slide” into someone else’s head when she gets these fainting spells. This is when she figures out there’s a murderer on the loose. I loved this sliding ability. It’s original, clever, and it can make for some serious amusement. I was a bit disappointed that it wasn’t elaborated more thoroughly, though. Curiosity gets the best of me and I want to find out why, how, and the purpose of these paranormal elements in books. Where do they come from? How did they get it? Who else is affected? When these bases aren’t touched it simply feel out of sorts in an otherwise contemporary novel. Regardless, I still found it fascinating as it took us into the minds of several characters, and essentially enforced them with personalities.

I’ve been reading murder mysteries since I was in my early teens. I have always loved them – one of my favorite series was Veronica Mars (still sad it was cancelled). Consequently, I’ve developed quite the talent of figuring out who’s guilty, so in my case I thought it was fairly predictable, but I wasn’t too put down by it. I was still kept constantly entertained, mostly by the characters’ relationships and family dynamics.

Jill’s ability to write well rendered characters and their relationships is what I enjoyed the most in Slide. We’ve got very deep, emotional issues that are touched in this story. Absentee fathers, deaths (including suicide), bullying, affairs – she was able to create serious life problems that are dramatic, but also deeply realistic. It’s incredible the way Vee deals with difficult situations she’s thrown into. I loved her relationship with her sister the most. Being basically the one raising her, she has incredible patience and maturity to stand by her, supporting her through all her rights and wrong. This is only one of the many reasons why I absolutely admired Vee’s character.

The mystery is fun, the characters are wonderful, and the pacing keeps you on your toes. Even though it didn’t blow my mind, Slide is definitely a book I’d suggest for all fans of murder mysteries – a rare gem in current YA.