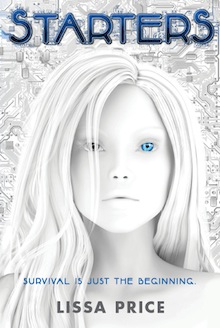 HER WORLD IS CHANGED FOREVER

Callie lost her parents when the Spore Wars wiped out everyone between the ages of twenty and sixty. She and her little brother, Tyler, go on the run, living as squatters with their friend Michael and fighting off renegades who would kill them for a cookie. Callie’s only hope is Prime Destinations, a disturbing place in Beverly Hills run by a mysterious figure known as the Old Man.

He hires teens to rent their bodies to Enders—seniors who want to be young again. Callie, desperate for the money that will keep her, Tyler, and Michael alive, agrees to be a donor. But the neurochip they place in Callie’s head malfunctions and she wakes up in the life of her renter, living in her mansion, driving her cars, and going out with a senator’s grandson. It feels almost like a fairy tale, until Callie discovers that her renter intends to do more than party—and that Prime Destinations’ plans are more evil than Callie could ever have imagined. . . .

First I have to say how surprised I was to see this cover in real life. It’s such a reflective shiny silver/white that you can see yourself in it. I mean look at it -I love it! 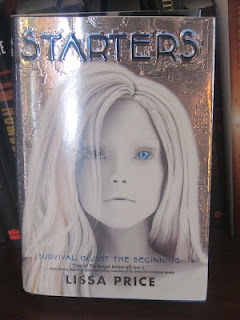 Inside this flashy cover, Lissa Price has written a fun, original dystopian that reminded me a bit of The Host (one of my favorite books ever), and even though the world itself could use more details, the story is highly entertaining.

After a war that only left children and seniors alive, Callie, orphaned, has decided to donate her body for a few weeks so she can get enough money to save her brother. As you can guess, things go wrong, and Callie ends up living someone else’s life. This premise enticed me the second I started reading, in addition to its fast pace that turns it highly addictive. Every chapter ends with such intrigue that you just. Can’t. Stop. It’s also full of suspense, as you never know when Callie will lose her body to her renter again, for how long, and worst of all – what she will be doing with it. One thing I would have liked, would be to have gotten more background details on the world itself; how exactly it managed to get to this point. As well as a bigger picture on the current civilization – or lack thereof. The story is so engaging, though, that I only cared about these sketchy details after the fact. My advice – just sit back and enjoy the ride!

Callie’s voice captivated me from the start. She’s tough and everything she’s doing is for her brother. It’s easy to ache for the loss of their world- being thrown from a normal loving family, a great comfortable life, into this unfortunate dystopian future. I loved how Callie handled herself in situations; always thinking on her feet but staying smart. I really had no problems connecting with her. The story mainly focuses on her, but there are a few interesting side characters to fill in the space that I’m hoping to get to know better in the upcoming books. There is also no big love story in this novel, however we still get to enjoy a fun romance that is sure to catch everyone’s attention. Especially with the fascinating twists that I never saw coming.

The twists- they’re plentiful. The secrets- even moreso. There is not a page in this book that didn’t have me pining for answers: Trying to figure out what exactly was happening; what these people really have planned; and the most intriguing – who is this Old Man? The man who’s face NO one ever saw. Who seems to be involved with everything, and everyone. The man who knows all the tricks, and he’s not afraid to use them! At last, the book ends with a bang!

Combining mystery and excitement, Starters is a vacation from reality that will leave you captivated through to the end. With the amount I’ve read, I’m surprised how dystopians keep being so interesting as well as original. Starters is definitely on my list of recommended, and I hope it makes it on yours too!