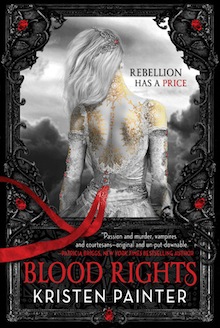 The lacy gold mapped her entire body. A finely-wrought filigree of stars, vines, flowers, butterflies, ancient symbols and words ran from her feet, up her legs, over her narrow waist, spanned her chest and finished down her arms to the tips of her fingers.

Born into a life of secrets and service, Chrysabelle’s body bears the telltale marks of a comarré—a special race of humans bred to feed vampire nobility. When her patron is murdered, she becomes the prime suspect, which sends her running into the mortal world…and into the arms of Malkolm, an outcast vampire cursed to kill every being from whom he drinks.

Now Chrysabelle and Malkolm must work together to stop a plot to merge the mortal and supernatural worlds. If they fail, a chaos unlike anything anyone has ever seen will threaten to reign.

*A copy was provided by Hachette Book Group Canada for review purposes*
With an infinite amount of vampire books on the shelves, Kristen Painter was still able to give us a lore that is original and quite complex. Add in some intriguing characters, fascinating politics, and elaborate rules; we’ve got ourselves a considerably well built paranormal world. I did find the plot itself a bit tedious, though, which in turn gave me time to ponder and eventually figure out the bigger plot twist, but I was kept entertained by the two main characters who are both infuriating and amusing, with highly interesting pasts.

Inside Blood Rights’ future world, we’re not only dealing with vampires, but a blend of supernatural creatures consisting of shifters, faeries, ghosts, and more. We also get introduced to Comarrés – a human/vampire half-blood bred to feed vampire elites. The latter is what our protagonist Chrysabelle is trying to run away from, which is how she meets our delightful second protagonist, Malkolm. Malkolm is cursed, he’s haunted by his past kills which makes him really unpredictable. He can be fine one moment and tormented the next. Hidden under this curse, we can see that deep down he’s truly a sweet guy (well, for a vampire), making it easy to feel for him and his unfortunate situation. Alongside unstable Malkolm, walks Chrysabelle; cool and collected, she can hold her own – mentally and physically – which is exactly what Malkolm needs. But does he want it!?

Filled with mysterious pasts, both of these characters are introduced to us like empty shells, to be filled and understood as we gradually learn the stories of their lives. I loved how this was played out, enlightening us just enough to make us aware they both have incredibly intriguing histories, but still leaving us in the dark, pining for more. Obviously, this means you can expect quite a few plot twists that, even though I was able to predict, are still interesting.

While I really enjoyed our two main characters, this was not the case for Tatiana – the villain of the show. She’s an evil, conniving bitch, but I felt like it got a bit excessive. She is so outrageously bad, so overzealous in her evil plans, that she becomes sort of a cliché; flat with no convincing personality. Whenever we switched to her perspective I was left feeling bored and wanting to move on. Her POVs are short and far between though so it wasn’t a complete turn off. To make up for it, the cast of secondary characters is filled with loyalty, charm, and of course, some romantic elements which range from endearing to heartbreaking.

Being thrown blind into a new world full of unfamiliar terms and rules, I did find it difficult to get into at first. We have to concentrate a lot on learning this world which magnifies the slow moving pace. However, seeing as the world building becomes one of the book’s best aspect, this tough start does pays off. A good beginning to the House of Comarré series, Kristen Painter’s Blood Rights has schemes and vampire lore that urban fantasy fans can assuredly enjoy.