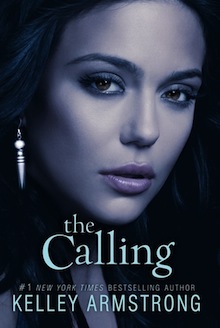 Maya Delaney’s paw-print birthmark is the mark of what she truly is–a skin-walker. She can run faster, climb higher, and see better than nearly everyone else. Experiencing intense connections with the animals that roam the woods outside her home, Maya knows it’s only a matter of time before she’s able to Shift and become one of them. And she believes there may be others in her small town with surprising talents.

Now, Maya and her friends have been forced to flee from their homes during a forest fire they suspect was deliberately set. Then they’re kidnapped, and after a chilling helicopter crash, they find themselves in the Vancouver Island wilderness with nothing but their extraordinary abilities to help them get back home.

*A copy was provided by Random House Canada for review purposes*
Kelley has been one of my first well-loved and favorite authors since I discovered her Women of the Otherworld series. Since then, her Darkest Powers Trilogy has also been added to my favorites, and even though I don’t love this trilogy quite as much, it’s still filled with the Kelley awesomeness that I live for! The Calling, the second installment in the Darkness Rising trilogy, continues immediately where we left off; it starts at a full speed that does not ease up until the end, where we’re left with a lot of anxiety, and a promise of an exciting finale.

The Calling is a full length high speed chase. In the wilderness, Maya and her friends are desperate to go home, or at the very least, to survive. It’s an adrenaline filled sequel with a lot of speculating and great character building, although not an incredible amount of plot development. This is not altogether a bad thing, though, as I feel we did get a lot of important discoveries that brings the characters up to par for an epic showdown in the third and final book. As in The Gathering, the last part of the story is where we get the brunt of the plot’s advancement, which leaves us with with an ending that is filled with uncertainty, in addition to having us wildly theorizing what’s to come.

What I love the most about Kelley’s books is that they’re all interconnected. Being a sister series to Darkest Powers, there is mention of our well beloved characters from the latter, as well as it having essentially the same conspiracies that came to affect their bizarre lives. With Kelley’s ability to craft real, in depth characters, it always gives me a sense of nostalgia knowing the people I previously grew to love and adore in her books are still around while this is all happening. In The Calling, we not only know these people are out there, but we get a glimpse at how they’re all going to come together. This makes me incredibly enthusiastic for the final book of the series. I think it’s going to be all kinds of awesome!

If you’re new to this series, I highly recommend you start it already! Especially if you enjoyed Kelley Armstrong’s Darkest Powers Trilogy. As usual, you can expect to be entertained to your full potential with this newest installment.

Want to know what I thought of The Gathering?
Click here for my review!

31 Responses to “Review: The Calling by Kelley Armstrong”