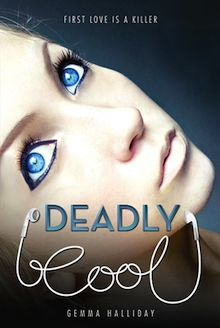 Hartley Grace Featherstone is having a very bad day. First she finds out that her boyfriend is cheating on her with the president of the Herbert Hoover High School Chastity Club. Then he’s pegged as the #1 suspect in a murder. And if that weren’t enough, now he’s depending on Hartley to clear his name.

But as much as Hartley wouldn’t mind seeing him squirm, she knows he’s innocent, and she’s the only one who can help him. Along with her best friend, Sam, and the school’s resident Bad Boy, Chase, Hartley starts investigating on her own. But as the dead bodies begin to pile up, the mystery deepens, the suspects multiply, and Hartley begins to fear that she may be the killer’s next victim.

There are a ton of funny books out there, and sure, plenty have made me chuckle, but very few have made me laugh out loud. Deadly Cool is one of them. Add in an engaging mystery and a dash of romance, this is perfect for a fun, diverting read. It’s exactly what I was in the mood for.

Hartley’s cheating ex-boyfriend is the #1 suspect in a murder. Convinced it wasn’t him, Hartley is determined to find the real killer. Besides, how can she kick his ass if he’s in jail? If you know me at all, you know very well that humor and sarcasm are my friends, thus it’s safe to say that Hartley and me would easily become fast friends. I love her mindset, her way of thinking is in sync with my own; I could not have related to her more. Above this amusing attitude, she’s feisty, smart, and super sweet. She is perfect for the tone of the story.

Although it’s a murder mystery involving more than one dead body with a constant threat for more, Deadly Cool keeps it on the lighter side. It does have a surprisingly tense ending, but in no way is this a scary or dark book. It’s delightful entertainment that’s perfect for a pick-me-up book; in my case, it was a great change of pace from all the dystopians and dark paranormals I’ve been reading. The mystery itself kept me engrossed; I kept theorizing who the killer might be. In the end I can’t say it would be impossible to predict, but I was satisfied with Gemma’s ability to keep me in the dark, while having all the clues fit undeniably well together in the end. Honestly, I was so consumed by the amusing tone of the book that I didn’t stop to ponder very much about the killer. Even if I would have guessed it on page one, it wouldn’t have spoiled my enjoyment of the book whatsoever.

As fun as it is, it’s not just fluff; there are some real emotions throughout. Overall, from Hartley’s relationship with her mom, to her encounters with the ever present police officer, to the copious modern day details – we’ve got a very realistic teenage life representation that is built through quirky observations and amusing behavior from Hartley herself. I mean, who doesn’t consider Ice Cream (with nuts and fruit!!) a balanced meal, or drive in a car that runs on cooking oil?

Witty, clever, and carefree – Deadly Cool an all around great time that’s sure to bring a smile on your face. It’s a perfect escape that will leave you craving for more!