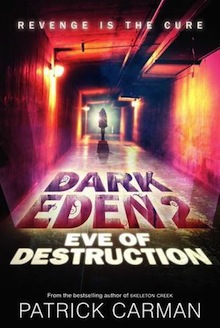 Will Besting and the other teens who were “cured” at Fort Eden are still experiencing the strange signs of aging  that were a part of their recovery. Now they are being called back to Fort Eden because Mrs. Goring is dying, and  for some reason she wants to see the seven teens together again.

But once Will and the others arrive at Fort Eden, they find themselves ensnared in a dangerous plan to finally end  the reign of Rainsford. Will must lead the group through a perilous underground trap masterminded by two devious  souls. Can he outwit both Rainsford and Goring and find a new cure?  Patrick Carman’s Dark Eden 2: Eve of Destruction is another terrifying journey into the depths of fear, love, revenge,  and—ultimately—redemption.

*A copy was provided by HarperCollins Canada for review purposes*
Dark Eden made my short list of 5-stars last year. It was creeptastic and thrilling; I loved it. Suffice it to say, I was highly anticipating this sequel. However, I don’t know if the author took a different approach, or if these are things I failed to notice in the first book, but among other things, I was mostly bothered by the writing style.

There IS such a thing as too much detail – in particular, too many clarifications to where it comes off as a tad juvenile. Or as though I’m not intelligent enough to interpret what is happening without having it spelled out for me.

– “I hit the camera switch for S4 and the door-open knob for R1 at the same time, which turned Rainsford’s feed off and opened the R1 door simultaneously”

-“She looked straight into the camera and gave Mrs. Goring the finger. And by finger, I mean the finger”

Yes, thank you for these clarifications!

This might be fine for some novels – especially for younger readers – but for a thriller such as this and from what I expected based on Dark Eden, I had a hard time taking it seriously.

The characters were incredibly hard for me to like in this sequel, mostly due to their naivety and poor judgment. Right from the start we get reacquainted with Will Besting when he gets a call from Mrs. Goring summoning the gang back to Fort Eden. Without a second thought on this ominous and obviously suspicious request they all agree that it’s a good idea to go back to this nightmarish place (huh?). Once there, they happily comply to Goring’s request to go down a dark and gloomy chamber that, “aghast”, they get trapped in. (Wow, they could have never seen this coming!)

“She wouldn’t put us through all these hoops just to fry us in the end.”

At least he keeps his faith in a woman who trapped them in an underground Missile Silo filled with death traps so she could use them to collect what she needs.

It may come off as a surprise, but I did not hate the book. The plot itself is still entertaining. I mean, death traps and evil masterminds! We also get a lot of answers to the questions we were left with in the first book. The vibe of the book itself is quite different since some paranormal aspects that were introduced at the end of Dark Eden are now in the forefront. I did find it interesting, but I had felt much more frightened in the first book where everything was occurring in our reality without supernatural elements; Dark Eden had me in a constant bewilderment for what was happening. We didn’t already know; the unknown was spine-chilling.

Do I still recommend it to fans of Dark Eden? I think some could still be satisfied with this one as a lot of the plot elements are intriguing and we have some exciting developments. However, I would suggest you proceed with caution.

Note: The quotes in this review are taken from the uncorrected proof.
The Dark Eden Series:

Want to know my thoughts on the first book?
Click here for my review of Dark Eden!

17 Responses to “Review: Eve of Destruction by Patrick Carman”