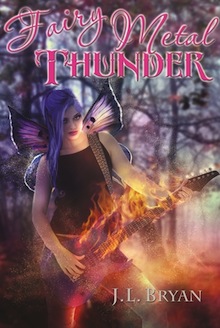 Jason plays guitar in a teenage garage band called the Assorted Zebras, but they have no fans, no gigs, and they’re going nowhere. Even worse, Jason has a crush on their lead singer, but she doesn’t seem interested in him at all.

Then Jason steals instruments from the fairy world. Soon the band is enchanting crowds, and Jason is a step closer to the girl of his dreams, but the new gear is brimming with dangerous and destructive magic they can’t control.

Their shortcut to success has cost a troupe of innocent fairies their livelihood and turned Jason and his band into enemies of the powerful and ruthless Queen Mab of Faerie, who sends supernatural bounty hunters to the human world to track them down…

*A copy was provided by J.L. Bryan for review purposes*
Fun and quirky; Fairy Metal Thunder is a quick read that you can easily finish in one sitting. After highly enjoying Jenny Pox, I was especially curious to see what JL Bryan had done with his attempt at a YA novel – about fairies nonetheless. First let me tell you that this could not be any more different from Jenny Pox, and I was greatly impressed. This is plain and simply entertaining with an effortless writing style that makes it easy to get absorbed inside this enchanting tale full of music and magic.

Let’s hear it for the Assorted Zebras! Jason, Erin, Mitch Mick and Dred can’t even get one simple lowly gig. But when Jason comes home with instruments from the Fairy Ream, the tables have turned. Now people can’t get enough of them – instant stardom. Like I expected from his previous work, the characters in this novel are all realistically fleshed out. They’re flawed and they make reckless decisions. These are teenagers, through and through. The band dynamics are amusing as well with just a tad of romance woven in. Then, we’ve got the creatures…

Fairies, goblins, elves, and… get this… a unicorn! And this is no ordinary unicorn either! The sweet, pretty, innocent creature is no more! *pets evil unicorn* It was fun to have these exotic mythical creatures bringing in even more life to the party. From delightful commentary on the realm’s past wars, to bizarre and disgusting eating habits; there is no lack of comical antics in this story. Overall we’ve got a great cast with all types of personalities to enliven these pages.

Going from one realm to the other, the plot is pretty straight forward with the Fairy band trying to find their instruments, and the Man-band (teehee) exploiting them. There’s nothing too complex; it’s a very light read in that regard. The Fairy lore is original and creative, although since we spend much more time in the human world, we don’t delve incredibly deep into Fairy technicalities. But we do get plenty of descriptive details when Jason visits the supernatural realm to boost our imagination of this eccentric land, as well as glimpses of what’s coming for these kids in the next books.

Magic music! That’s what you get inside JL Bryan’s charming YA novel. If you want something refreshing and genuinely fun, this is the book for you!