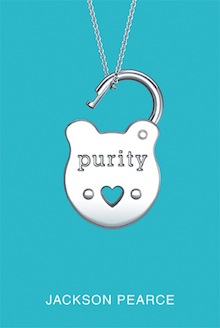 A novel about love, loss, and sex — but not necessarily in that order.

Before her mother died, Shelby promised three things: to listen to her father, to love as much as possible, and to live without restraint. Those Promises become harder to keep when Shelby’s father joins the planning committee for the Princess Ball, an annual dance that ends with a ceremonial vow to live pure lives — in other words, no “bad behavior,” no breaking the rules, and definitely no sex.

Torn between Promises One and Three, Shelby makes a decision — to exploit a loophole and lose her virginity before taking the vow. But somewhere between failed hookup attempts and helping her dad plan the ball, Shelby starts to understand what her mother really meant, what her father really needs, and who really has the right to her purity.

You have 5 weeks to lose your virginity… Go!

To keep her promises to her dying mother, Shelby has to find a loophole that will let her get away with breaking the vows she has to take in a few weeks. The answer: she has to have sex, STAT. A plot that starts out as mostly fluff and a bit silly, comes off being surprisingly touching by the end. I admit some things in this plot are a bit irrational. How she works around the promises, making decisions that are sometimes foolish and irresponsible, but underneath it all I could understand why Shelby thought she was doing the right thing. She is, after all, guided (or misguided) from a life lived by these promises; her only parental guidance in a way.

I was pleasantly surprised by a couple of things in this book. The first is the hilariously funny narration. The humor is so honestly clever that it catches you off guard for laugh-out-loud-and-spit-coffee-all-over-the-book moments. I loved it! The second is the inclusion of a recurring religious subject matter in the plot. Do not be put off by this, though. I usually immediately shy away from religious content, but Pearce writes it into the narration – a teenager’s point of view – while introducing realistic and shockingly (in my case) appealing thoughts on the matter. Shelby is questioning god’s existence, unable to believe in a god that would take her mom. Her thoughts on this intrigued me greatly.

Her mother’s promises, the princess ball, losing her virginity are all big storylines in the book. However, the one that is constantly hovering above all others, is Shelby’s relationship with her father. Not having a mother figure to turn to, she’s had difficulty connecting with him; merely running through the motions. As much as this book can be silly, fun, and fluffy, I can’t deny the emotional punch of this father/daughter connection – or lack thereof. In the end, it’s the most important side of this story, and one that will undoubtedly touch you.

In only 218 pages, Purity dishes out a great story full of laughter and heart. Even though we don’t explore the many topics we encounter in great depths, we do tap into a lot of different issues, whether thought provoking or just there for fun. In the end, it’s clearly meant for a light read with a lot of laughs and moving circumstances.