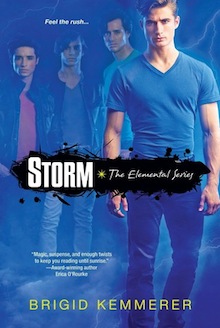 Earth, Fire, Air, Water – they have more power than you dream.

Ever since her ex-boyfriend spread those lies about her, Becca Chandler is suddenly getting all the guys—all the ones she doesn’t want. Then she saves Chris Merrick from a beating in the school parking lot. Chris is different. Way different: he can control water—just like his brothers can control fire, wind, and earth. They’re powerful. Dangerous. Marked for death.

And now that she knows the truth, so is Becca.

Secrets are hard to keep when your life’s at stake. When Hunter, the mysterious new kid around school, turns up with a talent for being in the wrong place at the right time, Becca thinks she can trust him. But then Hunter goes head-to-head with Chris, and Becca wonders who’s hiding the most dangerous truth of all.

*A copy was provided by Brigid Kemmerer for review purposes*
Four Five hot guys and one girl. Does anybody have a problem with this?

As if all this testosterone running rampant isn’t enough, these four brothers can control the elements: Water, air, earth and fire. The seriousness of these powers is made clear several times throughout this novel. It’s a powerful ability to have to be able to control anything from tsunamis and earthquakes, to the spread of diseases; all without raising an ounce of suspicion. Basically, easily becoming an unstoppable, invisible killing machine. I wasn’t sure how exciting a story about element control could be, so I was happily surprised by the constant sensation of danger that I felt while reading this novel. Surround this with a fast pace and intense action scenes, and we’ve got ourselves a pretty riveting plot.

The brothers. Oh boy. They’re quite the eclectic bunch. Each one unique and imperfect, these guys are all exceptionally well developed characters that will grow on you and make a lasting impression. I enjoyed their brotherly banter which never ceases to amuse me. I also found them all endearing even though sometimes I wanted to punch them. Along with these four brothers, we’ve got Hunter – the New Guy – which was my personal favorite of the boys, then Becca’s friends, classmates and parents. Overall, it’s a pretty big cast that Kemmerer incorporates impressively inside the story, giving them each charming personalities and important roles that contribute to the story.

Now on to Becca. Becca has to deal with all this hotness raucous. For a change, it’s the girl who gets to save the day at the beginning, by coming to Chris’s aid and saving his life – which is essentially how she gets sucked into his. Then of course, soon afterwards, she meets Hunter; giving us a love triangle that, even though I’m not a big fan of usually, I quite enjoyed in Storm. First, it’s hard not to like these two well-rounded guys who are both pining for Becca. Second, it’s very rare that I can feel chemistry from both love interests like I did in this novel. I constantly felt torn on who I wanted her to end up with. While I was happy about the straightforward relationship growth with Hunter, I found myself cringing when we got Chris’s reaction to it. Nothing felt forced for the sake of a cliché triangle, it’s truly a well written and complex romantic mess.

Full of constant twists and exceptional characters, Storm proves to be a fantastic debut that lives up to its cover. You’ll find the perfect amount of romance, action, and suspense for a great start to a very promising series.

Don’t miss your chance to win a signed copy of Storm!
Click here to enter