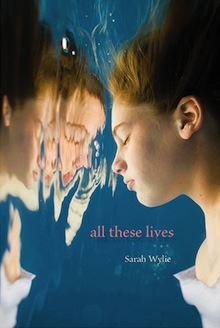 Sixteen-year-old Dani is convinced she has nine lives. As a child she twice walked away from situations where she should have died. But Dani’s twin, Jena, isn’t so lucky.  She has cancer and might not even be able to keep her one life. Dani’s father is in denial. Her mother is trying to hold it together and prove everything’s normal.  And Jena is wasting away.  To cope, Dani sets out to rid herself of all her extra lives.  Maybe they’ll be released into the universe and someone who wants to live more than she does will get one.  Someone like Jena.  But just when Dani finds herself at the breaking point, she’s faced with a startling realization.  Maybe she doesn’t have nine lives after all.  Maybe she really only ever had one.

*A copy was provided by Macmillan Children’s Publishing Group for review purposes*
While I was a bit thrown off by the nine lives viewpoint, All These Lives is a really captivating story about dealing with cancer in a loved one. What’s different in this one, is that the story is not actually about the cancer patient, but her sister, Dani. Dani and Jena are twins, Jena has cancer and Dani is battling with guilt. Specifically, she feels guilty for having nine lives, when Jena is fighting for her one.

Let me tell you straight up. Dany is a bitch! She’s snarky, rudely sarcastic, and kind of a bully. This could put off some readers, but I found it strangely interesting. If I knew her in real life I would detest her instantly, in this novel however, her voice is remarkably compelling. She amused me with her peculiar sense of humor, and her reflective thoughts are extremely tormenting. You can understand how much she’s really struggling, thus making her personality a little less… inviting. She’s hiding behind a mask so people don’t see how deeply she’s hurting. We’ve definitely got an original protagonist who may not have the best personality, but her tragically broken state makes this a truly memorable book. I also have to say that I was particularly pleased with the parental roles and their prominence in the story.

Dani thinks she has nine lives. She’s been in accidents that should have killed her, but didn’t. This aspect in the story is a tad strange. I was never sure if it was meant to add some supernatural elements into it, or if was simply Dany’s illusory contemplations about death. Even though it’s a big part of the book summary, this side of the story is not the primary focus. It’s not even about the actual cancer. It’s really more about the sisterly bond, and Dani’s unusual way of dealing. It’s not your typical cancer novel. Though you can still expect a lot of deep emotions; helplessness, loneliness, and desperation can clearly be felt throughout. There is also some humor and lighthearted moments, even a bit of romance, that gives it the perfect balance. I felt the ending could have gone with more spark; I was expecting more closure in some aspects, but I’m satisfied nonetheless.

A remarkable story about an atypical teenage girl in an unforgiving situation, All These Lives is a wonderfully moving novel that I think many readers will easily get immersed in. This beautify writing debut novel proves that Sarah is an author to watch for!

42 Responses to “Review: All These Lives by Sarah Wylie”