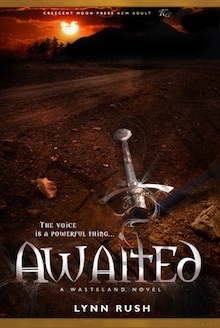 *A copy was provided by Lynn Rush for review purposes*
In Wasteland we met half-demon David, in Awaited, we get acquainted with Russell. Theoretically, this could be read as a stand-alone – although I don’t suggest it – meaning the book is in the same world, but we go through unique stories with familiar characters who will eventually meet up for the bigger picture. Like Wasteland, you can expect a lot of action and romance in this fast paced paranormal novel.

It starts with a bang when Russell and Durk’s plane crashes and they meet the only other survivor – Annabelle. I had met Russell in the first book so I was happy to get to know him better as he’s a great character. He’s a very old soul who’s starting to lose sight of himself in his loneliness. He’s a complex hero; I grew to understand and admire his strength, his determination. Annabelle is an instantly intriguing character as well. She’s mute, she has supernatural healing, and then she turns… bizarre. We meet her as a weak, feeble girl who grows immensely throughout this novel. Being mute makes it hard to get a read on her which left me equally sympathetic and wary. Thus, I enjoyed trekking through her history, as well as speculating about her future. She’s a really peculiar character with a story that is positively engrossing.

With such intricate personalities, we clearly need some romance, and Lynn delivers. Russell feels an unexpected, but intense attraction towards Annabelle. Surprisingly, even though it’s an instant attraction, it’s deep and powerful. You know there are supernatural forces at work which makes it especially interesting; Russell’s feelings for her are almost overwhelming even to himself. As with the first book, their connection is felt passionately throughout the story and only intensifies the plot. This is great since the romance itself plays a fairly big part in this book. Their tale is torturous and heartbreaking, but unquestionably romantic.

The world that Lynn has introduced us to in Wasteland is broadened in this sequel. We learn more about the war between angels and demons, as well as how their powers can be manipulated. This is one of the very few angel stories that I was able to get immersed in. It’s creative with an original lore that gives us constant surprises and never ending action. The twists keep you perpetually glued to the pages while the plot is revealed in a consistent manner, giving us plenty of excitement without it being overwhelming.

If you’re new to this series, you should know that it’s labeled in the new New Adult genre, meaning it’s not quite adult, but still very mature for a YA novel. It’s got steamy scene with characters that are in their late teens/early 20s. Consequently, this is a story that both YA, and adult readers could really get into. If you enjoy great world building with compelling characters and lots of action – the Wasteland series has got to be on your shelf!

The Wastelands series so far:

Have a look at my review of Wasteland!