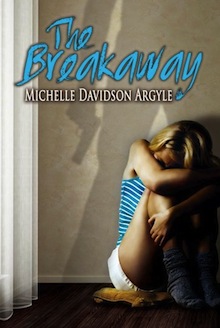 When Naomi Jensen is kidnapped, it takes her parents two days to realize she’s missing. Escape isn’t high on her list of priorities when all she has to return to is an abusive boyfriend and parents who never paid much attention to her. For the first time in her life she’s part of a family—even if it is a family of criminals. But she’s still a captive. In a desperate attempt to regain some control in her life, Naomi embarks on a dangerous plan to make one of her kidnappers think she’s falling in love with him. The plan works too well, and when faced with the chance to escape, Naomi isn’t sure she wants to take it.

*A copy was provided by Michelle Davidson Argyle for review purposes*
Stockholm Syndrome: “[noun, Psychiatry] an emotional attachment to a captor formed by a hostage as a result of continuous stress, dependence, and a need to cooperate for survival.” -Dictionary.com

This is not my first foray into this psychiatric syndrome and I find it fascinating to be honest. Developing feelings, or yet, falling in love with your abductor? Sounds impossible, right? Or at least something you can’t ever imagine allowing yourself to do in their situation. You’re too smart, too strong, you would have too much awareness to let yourself become “attached”. How ridiculous! This is how I used to think. Until I read my first book on the matter – Held by Edeet Ravel. Since then I am completely convinced that this could happen to anyone, easily. However, if this was my first book on Stockholm Syndrome, I’m not certain I would have had the same understanding.

“These feelings are generally considered irrational in light of the danger or risk endured by the victims. […] strong emotional ties that develop between two persons where one person intermittently harasses, beats, threatens, abuses, or intimidates the other” -Wikipedia

The circumstance in The Breakaway is not your ordinary kidnapping. Is there constant danger, threats, abuse? No. Naomi basically becomes one of them; living as a family with no feelings of true danger or stress. Sure, she is reliant on them and even a bit numb about the situation, but after the first little while, she lives a pretty relaxed, comfortable life. Even mentally she doesn’t seem to be incredibly distraught. Since her parents never cared for her, and her boyfriend beat her, she’s the happiest she’s been really. When I compare this to Held, where the girl was kept in an empty warehouse with her captor bringing her food when he could, it didn’t have the same intense feel I was expecting, where there’s a perpetual daily dependence towards the abductor. So this is all to say that yes, we’ve got a case of Stockholm Syndrome at its core, but I didn’t feel it truly did it justice. It simply felt as if a real relationship was growing in an atypical situation, instead of manifesting from an irrational dependency.

There is definitely some emotional dilemma happening inside Naomi. Did she really love her boyfriend? Does she miss him? Why don’t her parents care? It’s not your ordinary abduction, but it’s also not your usual teenage life. With no friends or family who care about her, being stuck in this house with this seemingly happy family who seem to genuinely like her doesn’t seem so bad at all. I did feel it went by rather quickly; since the book spans a whole year, we can skip weeks/months between chapters. Consequently, we don’t get incredibly deep inside her internal predicaments, but it’s definitely an intriguing situation that raises some questions. After a while, I didn’t even want her to try to escape. I, myself, got to really adore a few of her abductors. In this sense, Stockholm Syndrome was evidenced in her wanting to stay with this new family. As a longing for what she never had.

To flesh out these characters, there’s a lot of mystery regarding their lives, moreover, what led to this; what brought on Naomi’s kidnapping and what are their intentions. There’s a lot of background story that we learn about these people that helps us understand how this came about. These people are criminals, but every one has their reasons. The ending is bittersweet and satisfactory for a realistic conclusion to such a story. In the end, I can say that I quite enjoyed this book overall. It was much calmer than I expected, but I would easily recommend it for those who have a liking for psychological contemporaries.

29 Responses to “Review: The Breakaway”