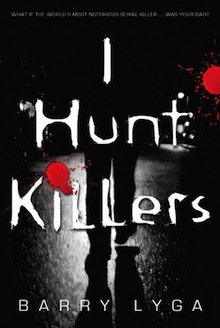 What if the world’s worst serial killer…was your dad?

Jasper (Jazz) Dent is a likable teenager. A charmer, one might say.

But he’s also the son of the world’s most infamous serial killer, and for Dear Old Dad, Take Your Son to Work Day was year-round. Jazz has witnessed crime scenes the way cops wish they could–from the criminal’s point of view.

And now bodies are piling up in Lobo’s Nod.

In an effort to clear his name, Jazz joins the police in a hunt for a new serial killer. But Jazz has a secret–could he be more like his father than anyone knows?

I love being in the mind of a serial killer. Is this bizarre? Maybe a little. But with an older sister at home, I skipped the fairy tales, instead I grew up watching Freddy Krueger and reading murder mysteries. Naturally, I Hunt Killers immediately attracted my interest with its serial killer’s son synopsis. Then when I removed the dust jacket and saw this: 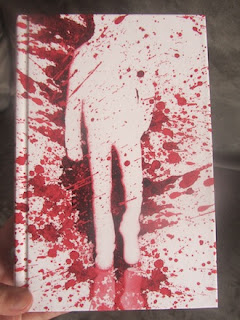 You have to admit, there is something fascinating about serial killers. The way they think, how they analyze and see the world. It’s no secret that they’re sociopaths, but in most cases they have very high IQs, making them highly interesting to study. These people are masterminds! In I Hunt Killers, being in the most notorious serial killer’s son’s head, we learn a lot about the ins and outs of this lifestyle. Jazz is such a captivating protagonist. He’s deeply disturbed by what his father has done, not just the killings themselves, but how he has was raised – to be his protege. He doesn’t want to be like his father, but is it too late? Is the damage done? It’s sad and it’s terrifying to be inside Jazz’s head. I questioned it all as much as he did. Is he sane? Is he dangerous? His best friend Howie is quite the opposite. He’s simple minded and a great supportive friend to Jazz. I adored him. Plain and simple. Together, they can be pretty amusing. I loved the added humor in this novel. It’s just the right amount to give it charm, while keeping the overall plot gritty and dangerous.

Howie: “What if the whole thing was just an accident?”
Jazz: “And what? Accidentally cut off three fingers postmortem? ‘Oops, oh no, my girlfriend just died! Clumsy me, in trying to perform CPR, I chopped off some fingers! Guess I’ll take them with me…Oh, darn, where did that middle finger go?’ “
–-Quote from finished copy of I Hunt Killers


I can’t forget to mention his Grandma, oh lord is she hilarious. She’s senile, suspected to suffer from Alzheimer’s with bouts of delirium; she was never really right in the head to begin with. As you can imagine, this brings up some pretty amusing antics from her when cops and media are involved. Like crawling on the floor army-style with a kitchen knife; it’s distressing, really – but her delusions are priceless.

“They’re gonna rape mongrel babies into me! Mongrel babies to kill white folks! And they’re gonna give me the AIDS to kill me off!” Grandma ranted
-Quote from finished copy of I Hunt Killers


Faint of heart? Does it bother you to think of feeding human eyeballs to a cat? You may want to steer clear of this one. Although it’s considered YA, there is a fair amount of gore and plenty of blood running through these pages. Jazz can’t get away from his father constantly invading his thoughts, and now he has to find the one mimicking him; the story is definitely explicit and I appreciate that Lyga didn’t shy away from it. This rawness – it gives a convincing portrayal of a teenage killer’s son’s story.

The mystery itself is not insurmountable. There are two or three obvious choices that become quite apparent, but there is still an extra twist I didn’t expect, and the bigger storyline of Jazz figuring himself out is what’s at the heart of this book. The ending – exciting and alarming – opens up tons of possibilities for the sequel which I am greatly anticipating!

33 Responses to “Review: I Hunt Killers by Barry Lyga”