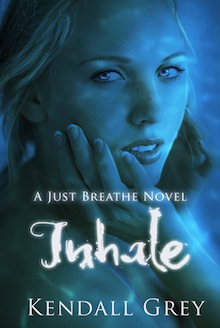 Strangers in reality, inseparable in dreams…

After years of suffocating under her boss’s scrutiny, whale biologist Zoe Morgan finally lands a job as director of a tagging project in Hervey Bay, Australia. Success Down Under all but guarantees her the promotion of a lifetime, and Zoe won’t let anything—or anyone—stand in her way. Not the whale voices she suddenly hears in her head, not the ex who won’t take no for an answer, and especially not the gorgeous figment of her imagination who keeps saving her from the fiery hell of her dreams.

Gavin Cassidy hasn’t been called to help a human Wyldling in over a year, which is fine by him. Still blaming himself for the death of his partner, he keeps the guilt at bay by indulging in every excess his rock star persona affords. That is, until he’s summoned to protect Zoe from hungry Fyre Elementals and learns his new charge is the key to restoring order in the dying Dreaming. He never expects to fall for the feisty Dr. Morgan…nor does he realize he may have to sacrifice the woman he loves to save an entire country.

*This book contains graphic language, sex, and some violence. Not suitable for readers under the age of 18.

*A copy was provided by Kendall Grey for review purposes*
Creative, original premise? Check.
Engaging characters? Check.
Hot sex? Triple check.
Do I have your attention yet?

I was wary at first when I saw there was talk of whale biology in this book as I have no knowledge or grand interest in the matter, but then I heard about the hot sex but I kept seeing such wonderful reviews that eventually convinced me to give it a try. I can say I’m really glad I did because this one is packed full or originality with a fast pace that never lets go, and the whale aspect actually managed to intrigue me. The world building itself had me a bit confused during the first quarter or so, trying to decipher this new paranormal world of dreams and elements. But I eventually caught on and found myself quite fascinated by the whole thing. We’re dealing with the four elements; an elemental imbalance in the Dreamlands is causing people to have nightmares, essentially affecting their moods or, worst case, getting them killed. It’s all fairly complex with a lot of information to take in, however, Kendall makes it work. In no time, it all ties together and we’re left with an immensely creative world that is brilliantly built.

There’s no skimping on the characters either. We’ve got Zoe; whale biologist, dreamer, independent butt kicker. She’s someone who knows what she wants, and tries her hardest to get it. She doesn’t need anyone to sling her along, or to point out the obvious, especially when it comes to Gavin. And who’s this Gavin? He’s the sex-on-a-stick rock star that appears in her dreams to, well, rock her world. Though, unbeknownst to her, he’s real. Very real! The romance is undoubtedly hot and steamy, but it’s also realistic. I could feel their emotional attachment, especially when Zoe finds out he exists outside her dreams – a powerfully written scene vibrating from the emotional dilemma. These protagonists are both wonderful; perfectly flawed and easily loveable.

Not only are these two full or life, the side characters are equally captivating, from the trustworthy mentor to the sexy villain. They all play their own distinct part in this elaborate universe, and they play them filled with charisma. It only adds to the already enthralling storyline.

A unique paranormal lore with a touch of fantasy, the plot in Inhale is constantly on the move. Since we go back and forth from the dream world to reality, as well as from Zoe and Gavin’s POV, there’s no stagnancy in here! If we’re not learning about their world, we’re taken into epic fight scenes, or quests to unmask the prophecy they were given; ultimately trying to restore the elemental balance before it’s too late. As far as self published books go, this is one of the better edited I’ve read – I was even surprised when I saw it was self published about 20% through. The writing is beautiful and flows smoothly with virtually no typos. If you’re serious about Urban Fantasy novels that kick butt – I highly recommend this one!